US President Obama and Russian President Putin have discussed the Crimea crisis via telephone. Obama called for Russian forces to withdraw, while Putin said Moscow reserved the right to defend its interests in Ukraine. 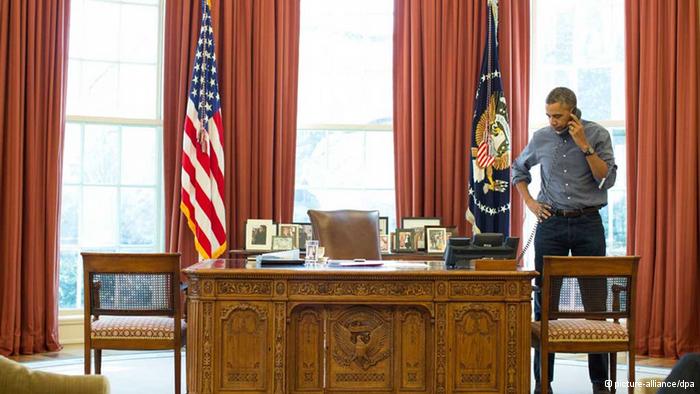 President Barack Obama reportedly told his Russian counterpart Vladimir Putin on Saturday that Moscow had violated international law by intervening in Crimea, calling for Russian forces to withdraw to their bases on the peninsula.

The White House has suspended its participation in preparatory meetings for the Group of Eight (G8) summit in Sochi this June. Obama said that Moscow would face further economic and political isolation if it did not work to de-escalate the situation in Crimea.

According to a statement published by the Kremlin, Putin told the US president that Russia reserves the right to protect its interests in Ukraine.

“In response to the concern shown by Obama about the plans for the possible use of Russia’s armed forces on the territory of Ukraine, Putin drew attention to the provocative, criminal actions by ultra-nationalists, in essence encouraged by the current authorities in Kiev,” the statement said.

“The Russian President underlined that there are real threats to the life and health of Russian citizens and compatriots on Ukrainian territory. Vladimir Putin stressed that if violence spread further in the eastern regions of Ukraine and in Crimea, Russia reserves the right to protect its interests and those of Russian speakers living there.”

Ukraine’s interim government has placed its military on high alert in response to Russia’s intervention in Crimea. Interim Prime Minister Arseniy Yatsenyuk said Kyiv would defend all of Ukraine’s citizens, regardless of whether they speak Ukrainian or Russian. He warned the Kremlin that a Russian military invasion would be “the beginning of war and the end of all ties.”

US ambassador to the UN Samantha Power said on Saturday that Russia’s intervention in Crimea “is without legal basis,” calling for the deployment of international observers to monitor troop movements in the disputed Russian-majority peninsula.

Power said that the decision by the Russian parliament to approve the use of armed forces in Ukraine “is as dangerous as it is destabilizing.” The US ambassador accused Moscow of acting unilaterally in violation of its commitment to the sovereignty, territorial integrity and independence of Ukraine.

“It is time for the Russian intervention in Ukraine to end,” Power said during an emergency Security Council meeting in New York. “The Russian military must stand down.”

The US ambassador went on to say that Washington was working to establish an international mediation mission for Crimea. She called on Moscow to engage directly with Ukraine’s interim government.

“Urgent need for de-escalation in Crimea,” Rasmussen said on Twitter. “Russia must respect Ukraine’s sovereignty, territorial integrity and borders, including with regard to movement of Russian forces in Ukraine.”

He emphasized that the Russian parliament had approved deploying armed forces “on the territory of Ukraine” but not “against Ukraine” itself. Churkin said that Moscow would protect ethnic Russians until the situation in Crimea stabilizes, calling for a return to the February EU-brokered political agreement, which ended days of violence in Kyiv.

“We need cooler heads to prevail and we have to get back to the political constitutional path,” Churkin said. “We need to back to the agreement of the 25th of February and establish a national unity government.”