(Courtesy NASA features) — The Expedition 41 crew of the International Space Station geared up Tuesday for a pair of spacewalks. Two NASA astronauts wrapped up final preparations to head outside Wednesday and replace a power regulator, while two of their Russian colleagues checked out spacesuits for an Oct. 22 excursion.

Flight Engineers Reid Wiseman and Barry Wilmore spent most of the day completing preparations for their 6 ½-hour spacewalk slated to begin around 8:20 a.m. EDT Wednesday. The two astronauts set up their spacesuits and tools in the equipment lock of the Quest airlock. Flight Engineer Alexander Gerst of the European Space Agency, who will help his crewmates suit up Wednesday and coordinate spacewalk activities from inside the station, joined Wiseman and Wilmore for a review of spacewalk procedures.

During Wednesday’s spacewalk, Wiseman and Wilmore will venture out to the starboard truss of the station to remove and replace a power regulator known as a sequential shunt unit, which failed back in mid-May. The two spacewalkers also will move TV and camera equipment in preparation for the relocation of the Leonardo Permanent Multipurpose Module to accommodate the installation of new docking adapters for future commercial crew vehicles. 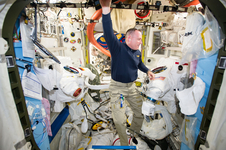 Flight Engineer Barry Wilmore conducts a scrub and cleansing of the water loops in his U.S. Extravehicular Mobility Unit spacesuit in the Quest airlock of the International Space Station.
Image Credit:
NASA

This will be the first spacewalk for Wilmore. Wiseman, who joined Gerst for a 6-hour, 13-minute excursion on Oct. 7, will be conducting his second spacewalk.

NASA Television coverage of the spacewalk will begin at 7 a.m.

Meanwhile, Commander Max Suraev and Flight Engineer Alexander Samokutyaev conducted systems and leak checks of their Russian Orlan spacesuits as they count down to their own spacewalk slated to begin on Oct. 22 at 9:24 a.m. During that excursion, the two cosmonauts will remove and jettison obsolete equipment, collect surface samples from a window of the Pirs docking compartment and photograph the exterior of the station.

To further prepare themselves for next week’s spacewalk, Suraev and Samokutyaev looked through the windows of the station to review the worksites and study the paths they’ll need to take to reach those locations.

Suraev and Samokutyaev also tested the Telerobotically Operated Rendezvous Unit, or TORU, in the Zvezda service module in preparation for the undocking of the ISS Progress 56 cargo ship on Oct. 27 and the docking of the new ISS Progress 57 cargo ship on Oct. 29. The crew can use TORU to manually guide a Russian spacecraft in the event of a problem with its Kurs automated rendezvous and docking system. 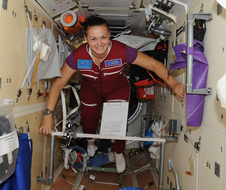 Amidst all the spacewalk preparations, the crew also found time to support the scientific research taking place aboard the orbiting laboratory.

Flight Engineer Elena Serova performed an equipment check for the Otklik experiment, which is developing a system to track the impacts of particles on the station’s exterior using piezoelectric sensors. Throughout the day she also manually mixed test samples in the Kaskad cell-cultivation experiment’s bioreactor.

Gerst performed water maintenance on the Aquatic Habitat currently housing a school of fish popularly known as zebra danios for the Zebrafish Muscle study. The goal of this experiment is to determine whether zebrafish muscles weaken in microgravity similarly to human muscles and, if so, isolate the cause. Results from the Zebrafish Muscle investigation may help identify molecular changes involved in the deterioration of muscles exposed to microgravity and could provide benefits to patients on extended bed rest and astronauts on long-duration missions in space.

Gerst also activated test samples for the Micro-8 study inside the Commercial Generic Bioprocessing Apparatus-6. This experiment is investigating the Candida albicans yeast in order to help scientists better understand and control the infectious nature of this opportunistic pathogen.