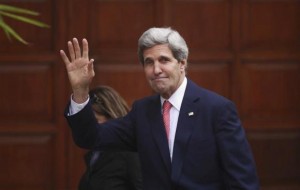 MANILA, Feb. 18 (PNA) — The Philippines on Tuesday welcomed the call of U.S. Secretary of State John Kerry to expedite the crafting of a legally-binding code of conduct in the disputed South China Sea, saying the accord will bring “peace, security and stability” in the region.

“These comments are fully in line with the basic Philippine and Association of South East Asian Nations stance that we should move expeditiously to conclude a binding Code of Conduct,” Foreign Affairs spokesman Raul Hernandez said in a statement.

In his meeting with Association of South East Asian Nations (ASEAN) Secretary General Le Luong Minh at the ASEAN Headquarters in Jakarta last weekend, Kerry reiterated Washington’s call for an early conclusion of a code of conduct and urged all claimants to exercise restraint amid brewing tensions in the resource-rich waters.

The Philippines, Vietnam, Malaysia, Brunei, China and Taiwan have competing claims over the South China Sea — the site of recent confrontations between Chinese military and civilian surveillance ships and vessels from the Philippines and Vietnam.

Although not a party to the disputes, the U.S. has declared that it is in its national interest to ensure peace and stability in the region and unfettered access to the waters.

A code of conduct, Hernandez said, would “reinforce regional peace, security and stability.”

Analysts feared that the competing claims could spark a military conflict in the region.

In 2002, ASEAN and China signed a non-bonding code of conduct that calls on all claimants to exercise restraint and stop new occupation in the South China Sea.

However, its non-binding nature and lack of provision to sanction misbehaving claimants, renders the accord useless against aggression.

The Philippines has renamed some parts of the South China Sea that falls within its territory as mandated by international law, specifically the United Nations Convention on the Law of the Sea, to West Philippine Sea.

China says it has “indisputable sovereignty” over nearly the entire waters, citing historical records and ancient maps to back its assertion.