MANILA, Philippines — The Office of the Ombudsman found senators Juan Ponce Enrile, Jinggoy Estrada and Ramon “Bong” Revilla Jr., liable for plunder, saying they took “undue advantage of their official position” in the use of their pork barrel funds.

Morales approved the recommendation of the five-member special panel that found probable cause to file plunder and graft charges against Enrile, Estrada and Revilla.

She also approved the recommendation to file the same charges against Napoles. 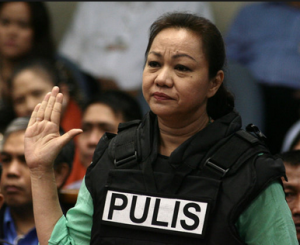 The charges against the public officials will be filed before the Sandiganbayan.

The joint resolutions found out that the respondents “conspired in causing undue injury to the government in the amounts of P345 million, P517 million, and P278 million from the PDAF of senators Enrile, Revilla, and Estrada, respectively by receiving kickbacks or portions of the diverted amount.

They were also considered liable for plunder and graft by being manifestly partial in the selection of Napoles NGOs and the conduit implementing agencies, which resulted in unwarranted benefit, preference or advantage to the Napoles NGOs that were chosen.

A statement from the Ombudsman said: “On the charges for plunder, the joint resolutions concluded that the three senators took undue advantage of their official position to illegally divert, in connivance with certain respondents, their respective PDAF allocations to the Napoles NGOs, in exchange for kickbacks/commission amounting to more than P172 million, P242 million, and P183 million in the case of senators Enrile, Revilla, and Estrada, respectively, with the PDAF-funded projects turning out to be “ghost” projects, under a modus operandi of a combination and series of of overt criminal acts repeatedly taking place over a number of years.”

According to the Ombudsman, Republic Act 7080 or the Anti-Plunder Law provides for reclusion perpetua (to death} and forfeiture of the ill-gotten wealth in favor of the government as punishment for those who will violate the law.

A certain Ronald John Lim at John Raymond de Asis were also to be included in charge sheet.

The Ombudsman gave the respondents five days to file their motion for reconsideration.

Separately, the senate also gave a panel report that recommended the filing of criminal charges against Enrile, Estrada and Revilla.

Enrile’s camp has declined to make any comment on the matter.  Revilla and Estrada said they would be filing their motion for reconsideration.