In celebration of the 25th anniversary of the World Wide Web, this coming March 12, 2014, let us get to know the man behind the most powerful and used technique that saves our freaking life in school and work everyday, Larry Tesler; the guy who invented the ever useful ‘Copy and Paste’. 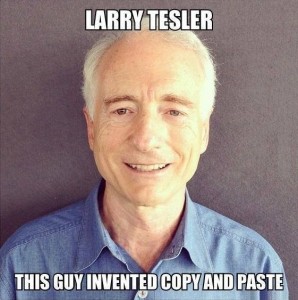 Lawrence Gordon Tesler was born on April 24, 1945, a computer science graduate from Standford University in the 1960’s. Lester is a computer scientist specializing and working in the field of human-computer interaction. Tesler has previously worked at Xerox PARC, Apple Computer, Amazon.com and Yahoo.

Larry Tesler worked with Niklaus Wirth to add object-oriented language extensions to the Pascal programming language. He was also active back then when he was developing MacApp, one of the first class libraries for application development. In addition to the Macintosh Toolbox – a shared, software library – and the application itself, he made the case for an intermediate layer that implemented what he called a “generic application”.  A generic application was a real interactive program with windows, menus, and commands that did nothing at all, but did it in a standard way.

In September 1991, Tesler also contributed the article “Networked Computing in the 1990s” to  Scientific American Special Issue on Communications, Computers, and Networks.

In 1997, Tesler decided to leave Apple Computer to co-found StageCast Software, which he was able to apply his enthusiasm for kids’ programming, an enthusiasm he acquired mainly at Xerox PARC.

His law of the Conservation of Complexity is known to programmers and designers alike.