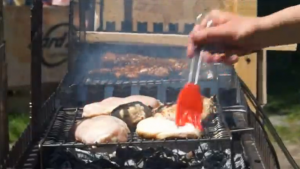 MAY 22 (Reuters) — A group of Ukrainian artists say they have come up with a novel way of supporting Ukrainian troops battling in the east and show their displeasure against Moscow’s role in the conflict.

The entrepreneurs have created a barbecue grill in the shape of Moscow’s Kremlin, which when put to use shows flames licking up the walls of the iconic building.

With the weather in Kiev turning sunny and more people holding barbecues in the open, the new item is proving a hot buy in the local market.

Founders of the Kremlin grill have called their project ‘Mordor on Fire’, a reference to a symbol of evil in writer J.R.R. Tolkien’s book series The Lord of the Rings. The Kremlin grill even features the flaming eye on top of one of its towers as depicted in the film versions of the series.

Co-founders of the project, Yaroslav, says the group’s creation is intended to tickle the senses.

“Kremlin on fire is symbolic. It’s Mordor (Black Land in J.R.R. Tolkien’s book series “Lord of the Rings”). It is an evil. Depending on the sense one has, he burns it. I am not against Moscow, I am not against Russia, I am not against Kremlin. I am against what they are doing,” said Yaroslav, as he watched the assembling of a grill at the factory in Kiev.

He added the group would donate some of the grills to Ukrainian soldiers in the eastern conflict zone.

“We plan to give barbecue grills to volunteers so that they can give them to the boys (Ukrainian soldiers), because now they are sitting there, fishing and preparing for attacks. They too need some support. It will be a form of moral support for them a burning Kremlin, it is actually all in the head. We live in the world of emotions and it that is most important,” said Yaroslav.

The large Kremlin shaped barbecue grill was set alight to feed hungry Ukrainians at a recent music festival in Kiev.

Festival goers gathered to catch a glimpse of the unusual grill and grab food from Yaroslav and Bogdan, who were offering a ‘Dragon’ menu.

Alexander, an attendant at the music festival, said he was more concerned that the Russian public would a have changing attitude toward Ukraine.

The group says they did not intend to put the grills on the market when they first conceived the idea for its shape. The first grill the group produced which was three meters long, and in the shape of the Kremlin, was initially put on display at street festivals in the capital earlier in the year.

The artists held barbecues and handed out meat to festival goers, but Yaroslav says their creation drew increased interest from the public and soon orders began coming from people wanting to buy the product.

The group says they have produced grills for eager buyers from Kiev, Odessa and other Ukrainian cities, as well as for clients abroad, including Canada and Georgia.