As the death toll from the capsized South Korean ferry rose above 50, the families of victims began a protest march to the capital, Seoul. They were stopped by police. 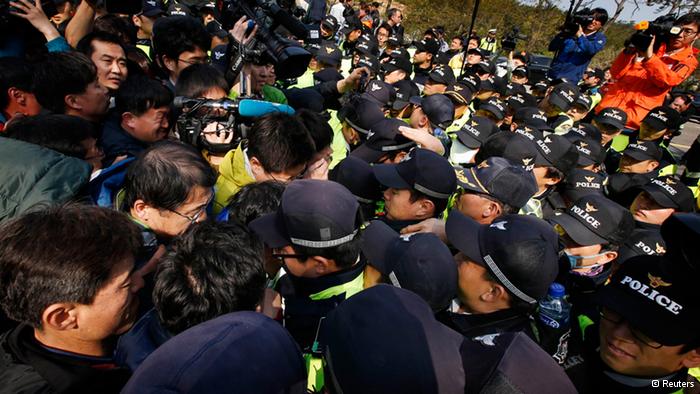 After more than three days, divers finally gained access to the capsized ferry, Sewol, retrieving 22 bodies on Sunday and bringing the death toll to 54. Strong currents, cold water and low visibility are hampering the operation. There are some 250 passengers still unaccounted for.

Early on Sunday, 200 police officers blocked about 100 relatives of missing passengers as they began a march to the presidential Blue House in Seoul, 260 miles (420 kilometers) to the north to voice their complaints about the rescue and recovery operation.

“We want an answer from the person in charge about why orders are not going through and nothing is being done,” Lee Woon-geun, father of 17-year old missing passenger Lee Jung-in, said. “They are clearly lying and kicking the responsibility to others.”

Prime Minister Chung Hong-won on Sunday visited the gymnasium where the relatives have been staying to dissuade them from marching to Seoul. He met with a number of their representatives who were to brief other relatives about the meeting later.

Multiple teams of divers have found various ways to gain access into the ferry and found bodies in different spots, coast guard official Koh Myung-seok said at a briefing on Sunday.

The ferry’s captain, Lee Joon-seok was arrested on Saturday on suspicion of negligence and abandoning people in need. Two other crew members were also taken into custody, including the third officer who, a prosecutor said, was steering the vessel in unfamiliar and challenging waters when the accident occurred.

The ferry Sewol had left the northwestern port of Incheon on Tuesday with 476 passengers onboard for an overnight journey to the holiday island of Jeju in the south. They included 323 students from Danwon High School in Ansan. The ferry capsized within hours of the crew making a distress call to the shore early Wednesday morning.

There is thought to be little chance of any other survivors being found. The country’s worst ferry disaster to date was in 1993 when 292 people lost their lives.