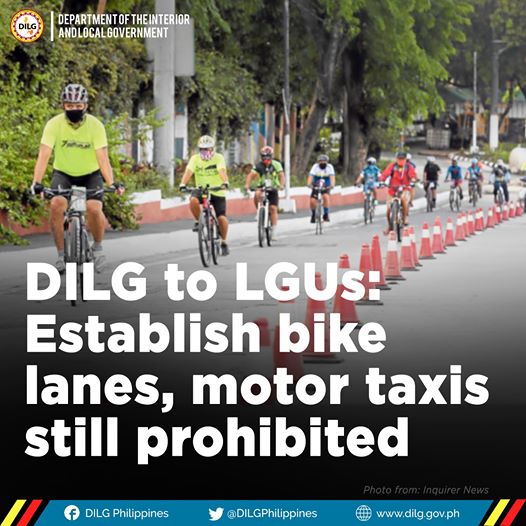 (Eagle News) – Local government units have been directed to establish bicycle lanes in their areas, to support cyclists amid the reduced capacity of public transportation due to the general community quarantine (GCQ).

The Interior secretary said that bicycles and other non-motorized forms of transporation is “strongly encouraged” under the new normal.

Hence, LGUs must enact ordinances to impose reasonable penalties on violations in the use of the bike lanes.

“LGUs should follow the Department of Transportation (DOTr’s) design approach of putting up plastic bollards, stencil markings, and signage in the designated bike lanes for the safety of the bicycling public especially in major thoroughfares”, the statement said.

The DILG also reminded the public that motor taxis, such as those hailed through motorcycle ride-sharing appas such as Angkas, are still not allowed under GCQ and MECQ.

The prohibition extends to married couples, as part of the physical distancing measures, DILG Undersecretary Jonathan Malaya said in a statement.

“[I]t will be impossible for the police and our traffic enforcers to check each and every motorcycle if these are married couples. If we grant one exemption, it will open the floodgates to violations by those who are not allowed. The health risks outweigh the benefits”, Malaya said.