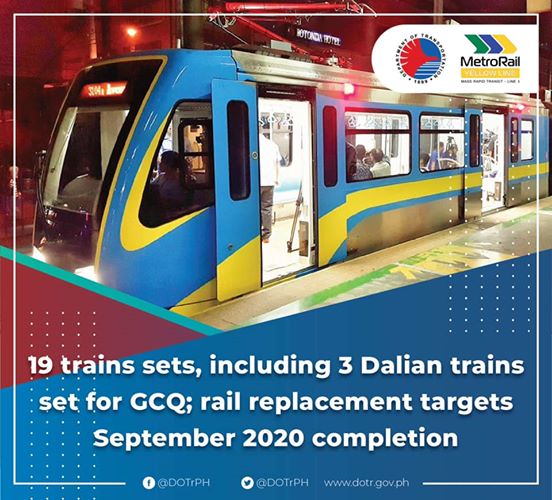 (The trains to be used on Monday will not be 14 or 15. We will use 19 trains. This way, there will be additional trips and passengers although we are only at limited capacity.)

Moreover, trains will be running at 40 kilometers per hour (kph) at certain sections of the MRT-3 mainline, instead of the operating speed of 30kph before Metro Manila was placed under enhanced community quarantine.

“This will reduce headway, or the time between trains, from an average of 9 minutes pre-ECQ to an average of 6 minutes upon resumption of operations”, the DOTr statement said.

According to the DOTr, the increased speed and train capacity is made possible due to the progress in rail replacement works during the quarantine period, as well as the deployment of 3 Dalian train sets.

The additional trains and faster speeds are also meant to mitigate the impact of social distancing protocols to MRT-3’s capacity.

— Rail replacement works to be completed in September —

The DOTr also announced that MRT-3 was able to advance its rail replacement works ahead of schedule due to the suspension of passenger operations during the quarantine period.

He added that rail replacement works are expected to be completed by September 2020, ahead of its target completion date in February 2021.

Because of this, train operating speed are expected to increase from 40kph to 60kph by December 2020, “leading to a reduction of headway, or the time between trains, down to 3.5 minutes”.

It will also improve the reliability of MRT-3 by lessening vibration, which is a common cause of malfunctions and delays, the DOTr statement said.