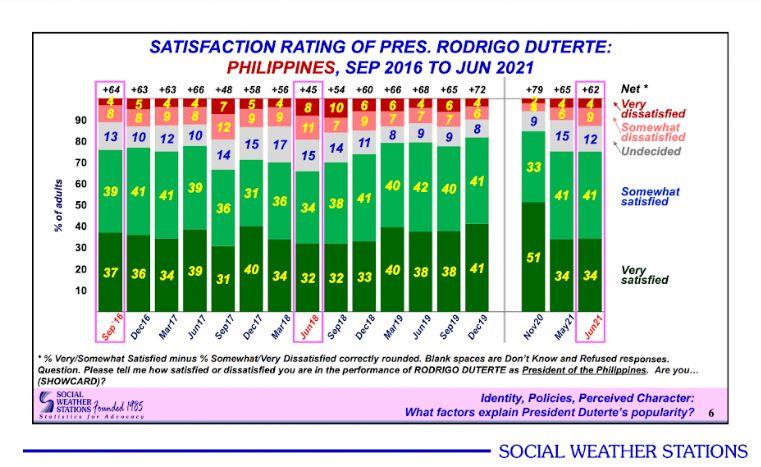 (Eagle News) — The Palace on Friday, Sept. 24, welcomed President Rodrigo Duterte’s net satisfaction rating  in the latest Social Weather Stations survey, saying it was also way ahead of his predecessors’ before they stepped down from office.

President Duterte’s resulting net rating, or the difference between those satisfied and dissatisfied with his performance, then, is at 62%, a “very good,” according to SWS standards.

Roque said former President Fidel Ramos’ rating was at 49% in 1997.

The late President Corazon Aquino, meanwhile, had a 24% rating in 1991.

He said “rest assured that President Duterte will continue to exercise decisive and compassionate leadership until the remainder of his term to serve and protect the interest and welfare of all Filipinos.”

The SWS said people who found the President  as decisive in his decisions and diligent were more likely to be satisfied with his performance.

The President scored his highest satisfaction rating  in November 2020, at the start of the COVID-19 pandemic in the Philippines, the SWS also revealed.

His rating was pegged at 84 percent in that poll.

President Duterte has accepted the nomination of PDP-Laban–Energy Secretary Alfonso Cusi’s group, in particular– for him to run as vice president in the May 2022 elections.