QUEZON City, Philippines – A recent study revealed that women across the world feel unsafe when taking public transport and walking around the city because sexual harassment in public has already became an everyday occurrence. While some cities here in the metro take a tougher stand against sexual harassment, sadly the number of incidents remain high.

The SWS survey conducted last February 2016 showed that there are still men out there who have problems controlling their urges.  According to the survey, 4 out of 5 women or 80% of the female members of the society, no matter the age, have experienced sexual harassment at least once. The experience ranged from the most common forms like wolf-whistling and catcalling to the worst forms like flashing and groping. 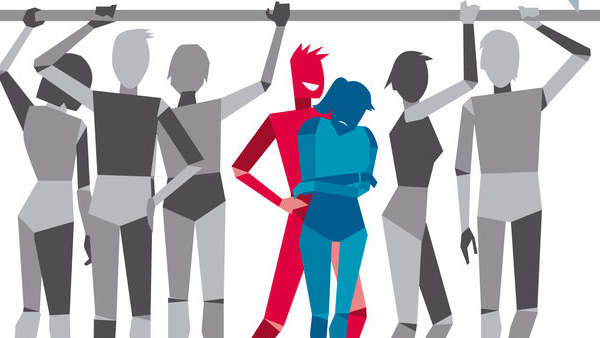 Social media has many videos and stories about girls and women experiencing sexual harassment.   The incidents vary, from a school girl being given ‘dirty looks’ while riding on public transport heading to school to a woman being physically assaulted. Some men were also caught on act while taking a photograph of an office-girl whose skirt was riding up.

A classmate shared her experiences of being harassed in the bus. While she was on her way to school,  a middle-aged man sat beside her. As she was sleepy, she dozed off and a few minutes later,  she felt a finger slightly caressing her sides, then she felt another, and another until a full hand was slowly about to touch the side of her breast. She moved far from the man which caused the man to hide his hand and act like he was not doing anything. Because of fear that if she confronted the man he’ll do something to her, she remained silent and hugged her backpack to protect herself. She stayed awake during the ride and the man that was sitting beside her transferred to a vacant seat at the back of the bus. My friend was left traumatized after the encounter, not wanting to ride a bus again after the incident.

Of course, there are incidents when men are sexually harassed by women as well as incidents of men and women harassing those of the same gender but statistics indicate that the majority of sexual harassment perpetrators are men and the majority of victims are women. As such, it needs to be urgently dealt with. Unfortunately, many reported incidents were not acted upon because of the prevailing “boys will be boys” attitude. Even worse, the victims themselves were blamed for wearing something that provoked the unwanted sexual advances.

And this is wrong.

Society is wrong when it hands over to women the responsibility to avoid sexual harassment. Rather, society should be against men doing it in the first place.

It is as if society is teaching women not to get raped instead of teaching men not to rape. It’s never about how a woman dresses up. How a woman acts and interact with people because no rational woman would be asking to be raped or to be harassed by a stranger.

Men should be educated to know that just because a woman is wearing nice clothes means “she is asking for it”.