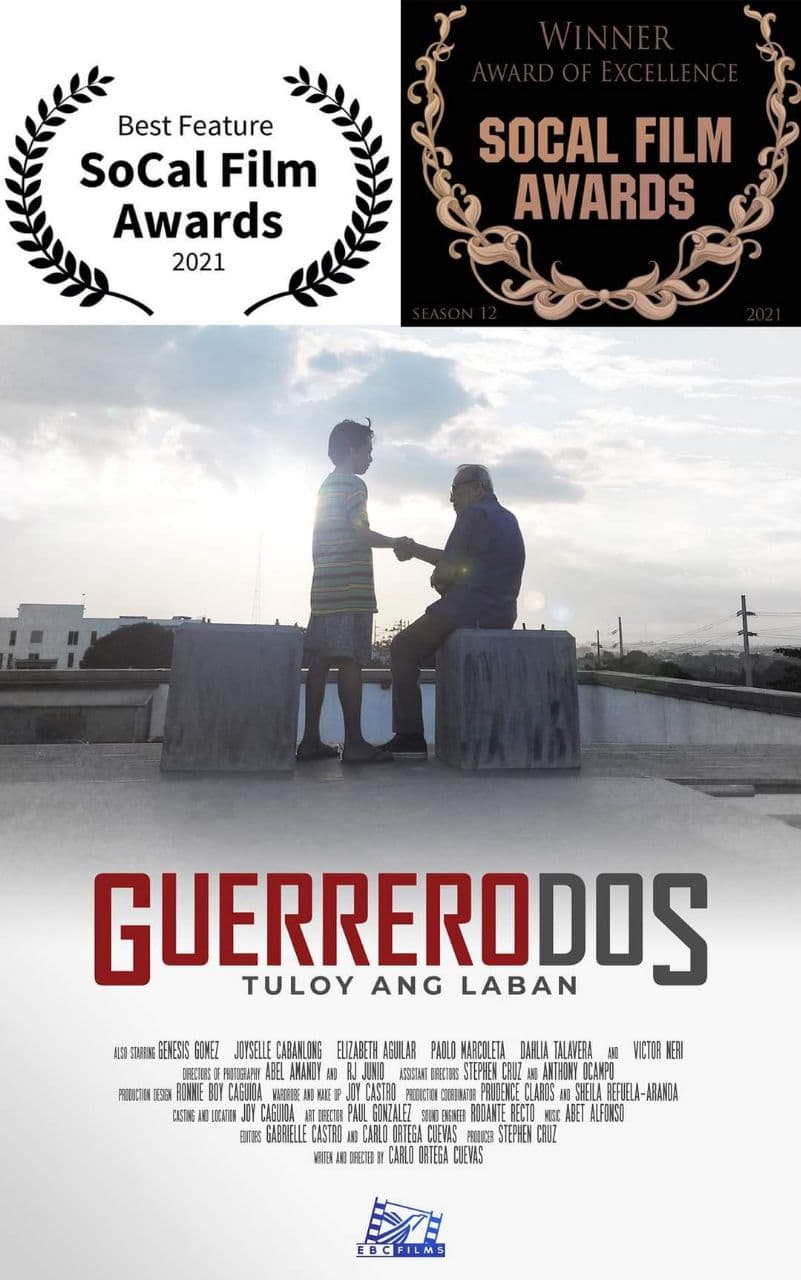 This is the film’s first win in a foreign filmfest.  It also came after “Guerrero Dos” became the Philippines’ official entry for Foreign Language Film at the 78th Golden Globe Awards. It also reached the official selection level at the 2020 Montreal Independent Film Festival in December last year.

The SoCal Film award of excellence was announced on March 15.

“The SoCal Film Awards has celebrated, honored, and shared the talents of independent filmmakers, up-and-coming screenwriters, and creative minds since 2005,” the filmfest’ website said.
It was previously known as SoCal Independent Film Festival. “We’ve taken that history and that legacy and re-branded as the SoCal Film Awards with a global audience of filmmakers, entrants and attendees,” according to its website.

“The Awards of Excellence is awarded to top notch creative minds for their grand accomplishments in any category,” it said.

The film’s director, Carlo Ortega Cuevas, thanked God for the award which is the movie’s first from a filmfest abroad.

“This is amazing and and an honor to be recognized outside the Philippines.  This is great, I owe this to our Almighty God and the hardworking Team at EBC Films,” Cuevas said.

“We were also surprised that ‘Guerrero Dos Tuloy Ang Laban’ suddenly had an award from SoCal Film Awards, and we all know that SFA features the best of the best movies out there, so we are very thankful, especially to our Lord God,” said the film’s editor, Gabrielle Castro.

The SoCal Film Awards started in 2005 “to celebrate independent filmmaking with theatrical screenings and workshops, guests and much more. We broke ground with new media events and screenings as well.”

“We are currently an online awards event without screenings,” it said because of the limitations brought about by the pandemic.

According to the site, filmfreeway.com, “an award from the SoCal Film Awards has meaning. It is a celebration of arts and independence and is reviewed and selected by professionals within the industry.”

-8 nominations in the PMPC’s Star Awards-

The movie’s theme song “Guerrero Dos: Tuloy ang Laban” which was sung by director Cuevas himself and E25 Records artist Rapido, was also nominated as Indie Movie Theme Song of the Year.

“Guerrero Dos” focuses on how his younger brother, Miguel, keeps the fight for hope and faith amid seemingly endless problems in his young life while waiting for his Kuya Ramon to wake up from a coma inside the hospital.

in the twists and turns of the movie that were shot mostly inside the hospital, Miguel’s life as it intertwined with the people around him is what captivates the audience.

It is a very timely movie especially this pandemic.