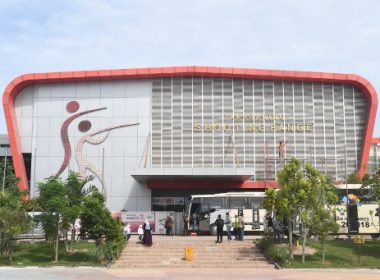 MANILA, Philippines (AFP) — Filipino athletes eyeing a spot at the 2018 Asian Games may have their work cut out ahead of this year’s regional Olympics in Indonesia after officials said only medal holders need apply. The southeast Asian nation, which has never won an Olympic gold and is known as a chronic underachiever in international sporting competitions, made the announcement Wednesday as it looks to boost the number of accolades it brings home. […] 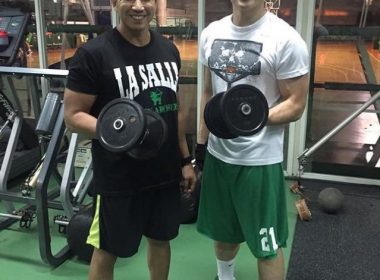 (Eagle News) — Multi-titled coach Aldin Ayo is the next head coach of the Growling Tigers. A spin.ph report said Ayo, whose contract with the Dela Salle University Green Archers was set to expire on December 31, already informed the management of his decision on Wednesday morning. His move comes days after two-time Most Valuable Player Ben Mbala announced his decision to leave the Green Archers to play professional ball in Mexico. According to the […] 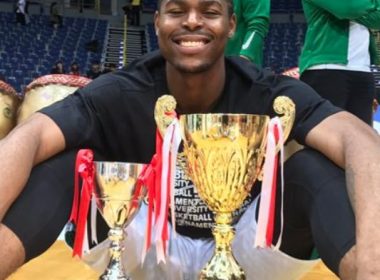 (Eagle News) — Ben Mbala is bidding the La Salle Green Archers goodbye. After five years with the UAAP team, the Cameroonian announced he was leaving, a decision he said was the “most difficult” to make but was necessary for his career development. The two-time MVP  has been signed by Fuerza Regia, a professional ball club based in Monterrey, Nuevo Leon, Mexico. “After five years, two incredible UAAP seasons, and, of course, countless unforgettable memories, […]

By Vivem Soriano Eagle News Service The La Salle Green Archers on Sunday dealt the Ateneo Blue Eagles their first loss in  Season 80 of the UAAP, denying their arch-rivals an automatic spot in the finals. Ben Mbala had a monster game, scoring 28 points, pulling down 18 rebounds and adding 6 steals and 6 blocks to power the De La Salle Green Archers to a come-from-behind 79-76 win. Ateneo was aiming for a sweep […]

By Vivem Soriano Eagle News Service The University of Sto. Tomas Growling Tigers avoided the infamy of having a winless season with a heart-stopping 88-85 victory over the University of East Red Warriors at the Araneta Coliseum. But the win did not come easy for UST. The Red Warriors forced a turnover off an inbound pass with less than 30 seconds remaining to cut the Tigers lead down to one. UE almost forced another turnover […]

FEU routs Adamson to complete Final Four cast; UP out

By Vivem Soriano Eagle News Service The Far Eastern University Tamaraws prevented a rocky detour in their quest for a Final Four stint with a resounding 71-54 victory over the Adamson Falcons at the Araneta Coliseum. With the win, FEU secures the fourth and only remaining spot in the Final Four, sending the University of the Philippines Fighting Maroons crashing out of contention despite their win earlier over the National University Bulldogs. A loss would […] 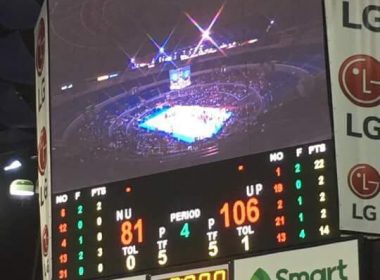 By Vivem Soriano Eagle News Service The University of the Philippines Fighting Maroons needed to win just to even have a glimmer of hope to force a playoff game for a Final Four spot. And oh boy did they come out with all guns blazing. Paul Desiderio lit up for 30 points as the former perennial cellar-dwellers UP Fighting Maroons torched the National University Bulldogs 106-81. With both teams needing to win just to even […] 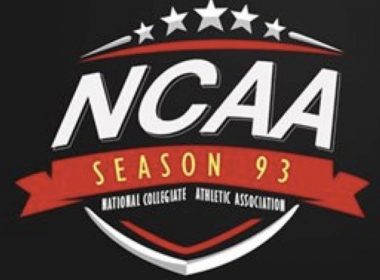 By Vivem Soriano Eagle News Service Robert Bolick poured 11 of his 24 points during a massive 4th quarter run as the defending champions San Beda Red Lions dealt the LPU Pirates their first loss of the season with a 94-87 Game 1 win at the Araneta Coliseum. With San Beda leading by just a point, 83-82, Bolick scored a big 3-pointer over a tough Lyceum defense. He then converted 3 free throws after he […]

Ateneo still unbeaten after another UP collapse

By Vivem Soriano Eagle News Service The Ateneo Blue Eagles remain unbeaten and on top of the UAAP standings after a 96-82 come-from-behind win over the UP Fighting Maroons at the Araneta Coliseum on Wednesday. The Maroons started the game strong, finishing the 1st quarter up by a point 23-22. The good run continued for the Maroons in the 2nd quarter with team captain Paul Desiderio leading the charge with 13 first half points. UP […]

By Vivem Soriano Eagle News Service The National University Bulldogs pulled off a gutsy 87-84 win over the Far Eastern University Tamaraws to keep the race for the last Final Four spot wide open. NU center Issa Gaye scored 24 points and hauled down 11 rebounds, while Jayjay Alejandro delivered 17 points for the Bulldogs. The pair came up big when it mattered most, outscoring the entire FEU squad 20-12 during the pivotal 4th quarter. […] 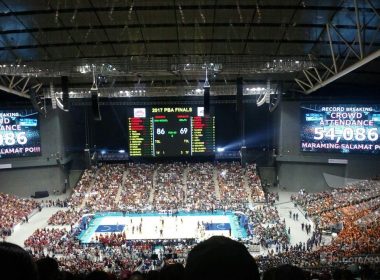 News in photo: Record-breaking attendance of 54,086 at PBA championship in PHL Arena

Basketball fans who wanted to watch live the epic Ginebra San Miguel vs Meralco Bolts’ Game 7 final match-up reached a record-breaking 54,086 at the Philippine-Arena which can seat a maximum of 55,000 people in Ciudad de Victoria in Bocaue, Bulacan on Friday night, October 27, 2017. The cliffhanger game ended with Ginebra San Miguel beating the Meralco Bolts, 101-96, to become the back-to-back Philippine Basketball Association Governors’ Cup Champions that night, with […] 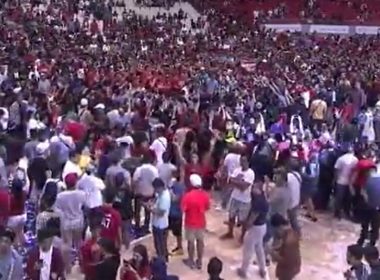 (Eagle News) — Ginebra won the the 2017 PBA Governors’ Cup, with a score of 101-96, defeating the Meralco Bolts in a packed Philippine Arena Friday night that was a nail-biter at the stretch of the fourth quarter. With the win, Ginebra becomes the back-to-back Governors’ Cup Champion. Ginebra coach Tim Cone thanked the more than 54,000 people who packed the Philippine Area in Bulacan, saying this was the first time he had coached […]