I have wanted to weigh in on Uber’s suspension (and ride-hailing/sharing in general) for a long time, but have always decided against it. The arguments for and against it have always been too emotional, and I am loathe to wade into that. It has become one of the topics one should steer clear of if one wants to avoid arguments, along with politics.

What pushed me to go write about it was this: 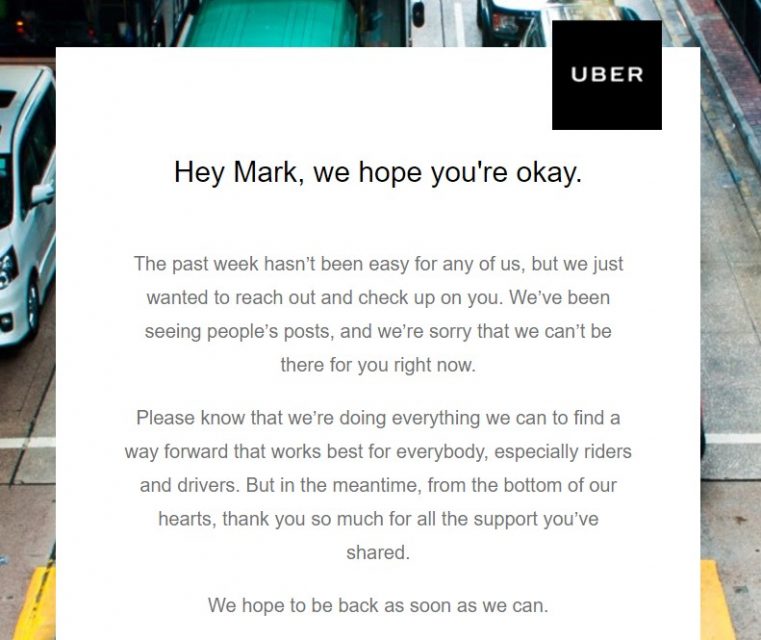 It was another banal mass email from another company, yet it somehow rubbed me the wrong way. Yes, of course I am OK. I have lived and commuted for years without Uber and I can certainly go on without it for a month. Uber is not indispensable.

So here I go, wading in…

With all the emotion involved in the debate, it is best to narrow down the question to these:

Among the reasons posted in #wewantGrabUber and on the change.org petition are:

This point can be found in numerous posts in the thread, and also one I always encounter whenever the topic of Uber’s suspension comes up. Why is Uber being singled out by the LTFRB for violating rules when others continue to violate other regulations? They point to other violators such as taxi drivers who refuse to convey passengers, colorum buses who continue to ply the streets, and jeepney drivers who drive recklessly. Why not suspend them?

Someone who was caught violating the law is not always “singled out” for prosecution, he was simply caught. I doubt a defense of “yes I broke the law, but others did, too! Why not go after them?” would gain much traction in a court of law.

Another common reason put forth as to why Uber should not be suspended is because this would affect the livelihood of the thousands of Uber partner-drivers.

I get where the drivers are coming from. Some of them resigned 9-to-5 jobs so they can drive for Uber full-time, and based on some conversations I had with Uber drivers, they earned more driving. But, whose fault is it really that Uber got suspended? Was it LTFRB’s fault for imposing a penalty on a company that violated an order – blatantly at that, according to the agency? Or was that the company’s fault for having violated the order in the first place?

If Uber were so concerned about their “partner drivers,” then they can simply compensate them for lost income. It is a multi-billion dollar “unicorn” after all, and can probably take the financial hit.

In any case, this is a red herring. Uber is all about efficiency. It’s “partner drivers” are not employees and I doubt they have any legal obligation towards them. And in the long run, the objective is to phase out human drivers and replace them with even more cost-efficient driverless cars. That hardly echoes “concern” for the drivers.

There are lots of other reasons posted there and I really couldn’t go through them all.

It seems quite clear that Uber did violate the LTFRB freeze order. It is on the second question that opinion varies wildly. Should one suspend Uber? For how long? Perhaps the government should fine Uber instead? If so, how much?

I take Grab/Uber nearly every day, so when Uber’s service was suspended, it also affected me. But as is clear from the preceding paragraphs, I am all for the suspension. How about a fine? Maybe that will work, but, as we have seen with the US banking industry, fining sometimes is not the best way to prevent further wrongdoing. How much of a fine should be imposed on a company worth around $60 billion to make them sit up and take notice?

What is clear, though, is that this debate is not based on facts and figures, but on messaging and how one manages the public perception. Politics, if you will.

When Uber frames the debate as between technological innovation against outdated laws, Uber wins. It essentially casts them as “the future” and the government as “the past.” (They are not 100% off the mark there) When Uber frames the suspension as being bad for their “partner drivers,” Uber wins. When Uber casts itself as part of the solution, then by default, the government is part of the problem in this argument, thus, Uber wins. 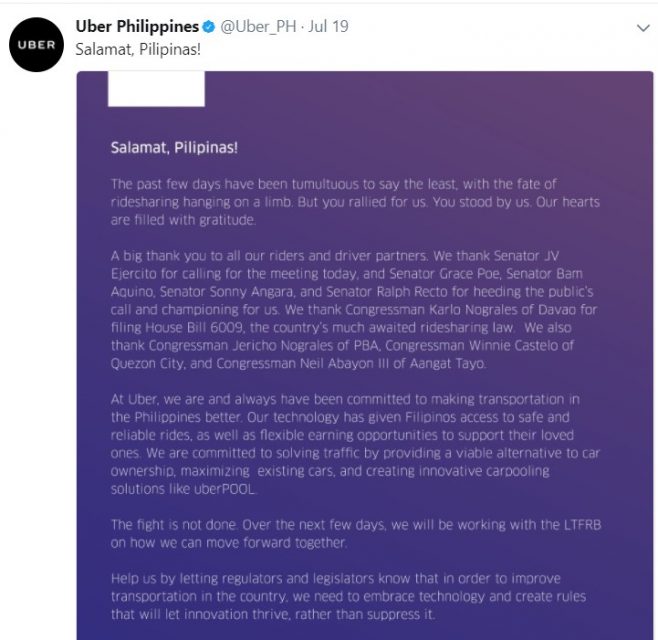 The government, on the other hand can only draw on vague platitudes such as rule of law. Compared to technological disruption, rules lose out in the public discussion. Everyone hates rules in the abstract – no one wants to be told what to do.

Eventually, Uber and Grab or ride-hailing/sharing in general would win. They would be regulated, sure, but the regulation would be made in consultation with them. In other words, mostly in their favor. There is way too much public clamor for ride-hailing/sharing, and way too much financial incentive (for both the government and the companies) to not come to a compromise.

I just wish people would see it as it is: a political debate with both sides having something to gain.

As Travis Kalanick himself said: What we maybe should’ve realized sooner was that we are running a political campaign and the candidate is Uber.

Indeed. We should realize that, too.