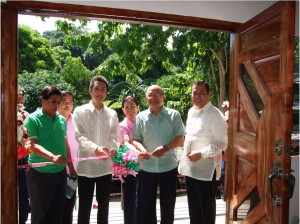 NUEVA VIZCAYA – First Secretary Hiroyuki Enoki attended the turnover ceremony for “The Project for Construction of Women’s Training Center” in the Municipality of Quezon, Nueva Vizcaya. This is part of the Japan Official Development Assistance (ODA) under the Grant Assistance for Grassroots Human Security Projects (GGP).

The ceremony was attended by Ms. Prescilla Soriano, Chairperson of the Management Committee of Aldersgate College and other officials of the school. It was also witnessed by officials from the Provincial Government of Nueva Vizcaya and other related agencies.

The Women’s Training Center was funded by the Embassy of Japan (EOJ) last FY2012 with a total grant amount of One Hundred Four Thousand Two Hundred Thirty US Dollars (USD 104,230) or approximately Php 4.06 million. This project involves the construction of women’s training center and procurement of training equipment. The center will be a venue to conduct livelihood trainings for women in organic farming such as planting of tomato. They will also be trained in food processing of vegetables harvested from the organic farms as well as the proper marketing of these processed goods. Through the trainings, women are expected to have jobs that will increase their income and improve their socio-economic status. The Embassy of Japan expects that this project will be used for the best interest and welfare of around 1,600 residents in the Municipality of Quezon, thereby contributing to reduction of poverty in the province.