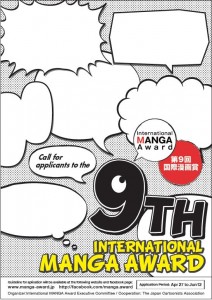 MANILA – Great news for MANGA Artists! The Minister of Foreign Affairs and Chairman of the MANGA Award Executive Committee, Mr. Fumio Kishida has announced the opening of the 9th International MANGA Award for non-Japanese artists.

Interested individuals may submit their entries until Friday, 12 June 2015. Applications should be mailed either to the designated foreign mission or directly to the Committee to the following addresses:

The International MANGA Award was established in May 2007 upon the initiative of then-Minister for Foreign Affairs Mr. Taro Aso with the aim of awarding MANGA creators who contribute to the spread of MANGA culture overseas and international cultural exchange through MANGA. The award has been held every year since its establishment.

The best MANGA among the submitted works will be awarded the Gold Award. The next three best MANGA shall receive the Silver Award. Recipients will be invited to Japan by the Japan Foundation to attend the award ceremony. During the stay in Japan, they will also exchange opinions with Japanese MANGA creators, make an excursion and visit publishing companies and other places. (Eagle News Service/Embassy of Japan)