Russian Ambassador to the Philippines Igor Khovaev encouraged Filipinos to visit his country during the cocktail reception to celebrate Russia Day organized by the Russian Embassy held at the Rizal Ballroom at the Makati Shangri-La, June 8, 2018. 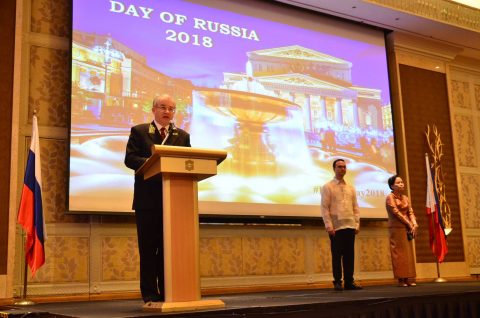 “Our two peoples deserve to know each other, much much better. We have no contradictions, no differences.  I strongly believe that our countries need each other,” the Russian Ambassador said.

According to the Russian Ambassador, the Russian-Philippine relations has “gained momentum” with “tangible developments”.   He described the level of diplomatic relations between the two countries as a “level of solid partnership”.

According to him, the agreements signed by the Philippines and Russia in the recent past are more than the documents signed in the previous 40 years since the establishment of diplomatic relations.

“We have never been partners or allies in the past.  But now we are opening up for international cooperation and partnership.  A partnership which is in mutual compliance of the peace, stability and respect in the Asia Pacific Region,” he said. “We are opening up investment opportunities,” Ambassador Khovaev also announced.

Inspite of the challenges and hardships, he cited that the Russian economy “has now gained the most stable fruit”. “We were able to preserve microeconomic stability in the country.  Inflation rate is now at its lowest in the modern Russian history which is just at 2.5 percent.  Our reserves in foreign currencies are increasing,” he said.

The strong foundation of the Russian economy was heralded at the 2017 St. Petersburg International Economic Forum on May 24 – 26 attended by 17,000 people from 143 countries including the Philippines. According to the Ambassador, contracts signed at the sidelines of the Forum amounted to 37 billion dollars.

For the EBC coverage of the Yalta International Economic Forum which focused on the future of Russia as its main theme, click this link.

The Russian Ambassador also highlighted Russia’s hosting of the FIFA world Cup 2017.  “Be part of this festival of sports.  Such occasion should connect people from all over the world, from all walks of life regardless of  views.  Such events should not be politicized under any conditions,” he stressed. 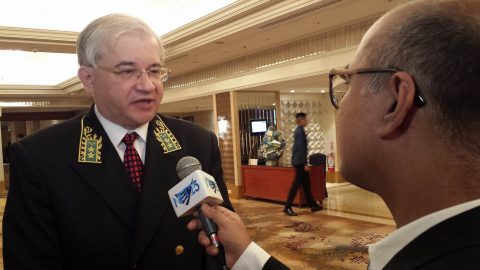 According to him, the Russian government took efforts to make it easier for all for people to enjoy the football experience including the free railway tickets between 11 Russian cities that are opening the gates for the World Cup.

Before offering a toast, Ambassador Khovaev took a lighter note by saying that he was infected by Filipinos with “powerful viruses”.

“Among them are singing, dancing, picture taking, fashion shows, beauty pageants and smiling.  I am successful in smiling,” he said.

“I am indebted to the Filipinos for infecting me with these pleasant viruses and I am afraid these are quite incurable,” he added.

For his response, Department of Foreign Affairs Secretary Peter Cayetano mentioned the “persistence” of the two countries to have better relations. 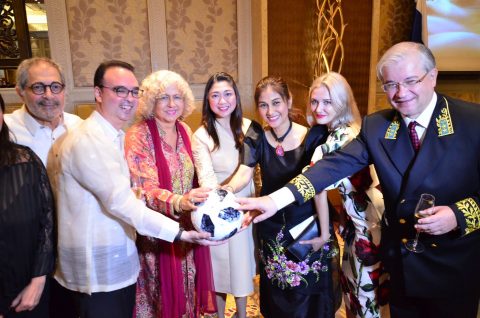 He added the Philippine-Russia relations under President Rodrigo Duterte has grown at an unprecedented pace that resulted to 23 signed agreements.

“Our closer engagement with the Russian Federation has been translated into mapping areas of cooperation in the areas of agriculture, trade, energy , transport, security, tourism, defense, mutual legal assistance, extradition, higher education, intellectual property protection, use of nuclear energy for peaceful purposes and culture and arts,” the DFA Secretary said.

In the areas of travel and tourism, watch EBC’s featured links of  Tversakaya, Red Square and Simferopol Airport.

Addressing the Russian Ambassador, the DFA Secretary said, “ I assure you of a continued cooperation between the two countries for the benefit of all Russians and Filipinos.”

Business leaders who were present at the Russia Day celebration expressed optimism on the impact of the stronger partnership between the two countries. 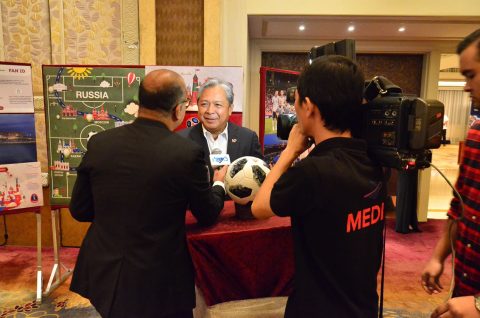 Jaime J. Bautista, President and COO of Philippine Airlines said that more flights and aircrafts are scheduled to Russia including chartered flights to Vladivostok.  He expects a tourism boost created by the strengthened diplomatic relations.

On the other hand, Fernando L. Martinez, Chairman and CEO of GAZelle Motors Corporation expressed that Filipinos accept and welcome Russian brands.  As a matter of fact, Russian-made motor vehicles are now plying the Philippine roads.  Aside from oil and gas, Martinez expects huge opportunities in agribusiness and tourism as a result of the stronger friendship between Russia and the Philippines. 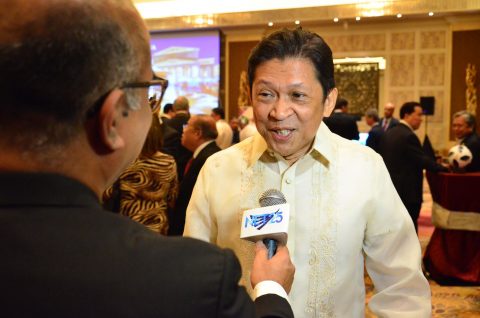