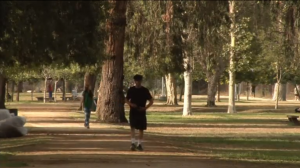 JULY 7 (Reuters) — Los Angeles city officials say they don’t have enough water to irrigate all the trees in the city so they are cutting down those that are dead or dying from drought.

According to the city, roughly 14,000 trees have died in the last year alone from drought.

”It’s difficult to say the specific cause of death. But the drought is a very much a very real contributing factor,” said Laura Bauernfeind, an arborist, and the principle ground maintenance supervisor for the City of Los Angeles Department of Recreation and Parks.

The North Hollywood Park had some of its trees removed just before the 4th of July holiday weekend. Some parks goers are upset by what they say are drastic actions.

”They never came to us and said here are your options. So I feel, I feel very sad for the park and any park that has to go through this,” said Kalee Przybylak, who lives near the North Hollywood Park and exercises there.

“Trees are dying everywhere. And if we can replace them with more drought tolerant foliage, I think we’d be better off,” said David Keesey, another local resident and frequent park visitor.

According to Kirsten Fisher, an assistant professor of biology at California State University in Los Angeles, there are numerous consequences tree removal may have on local ecosystems and on park visitors.

“So if we take out trees and don’t replace them, it has, like I said, it has heat island effect. Right? But it also reduces habitat for wild animals, so birds that are migrating through or other animals that rely on trees for shelter and food will not have those trees anymore. So of course, they will be eliminated. And a lot of those animals provide other ecosystem services. Right? Like pollination of our flowers and our trees. They won’t be around to do that. So that’s a problem. And then on a more sort of I guess, mental health note right trees in our environment really improve our mood, improve our emotions and our emotional state and so removing them will also have sort of a emotional or psychological impact on city residents as well,” said Fisher.

Bauernfeind says given the historic drought, the city is doing a balancing act between saving the trees and enforcing people’s safety at North Hollywood Park.

“The park is 55 acres. We have 950 trees. What we have scheduled for removal is about 56 trees. That’s about 6%. That is a lot of trees when you look at the number, but there are still a lot of beautiful, mature trees here. So I don’t think it’s going to definitively change the park going experience or affect how they enjoy the park.”

The U.S. Forest Service has been closely tracking tree deaths since the start of the drought, now in its fourth year. California’s drought led to the deaths of 12.5 million trees in the state’s forests last year.