One hospital per LGU in Metro Manila to be chosen for pediatric A3 vaccination, says DOH Usec Cabotaje 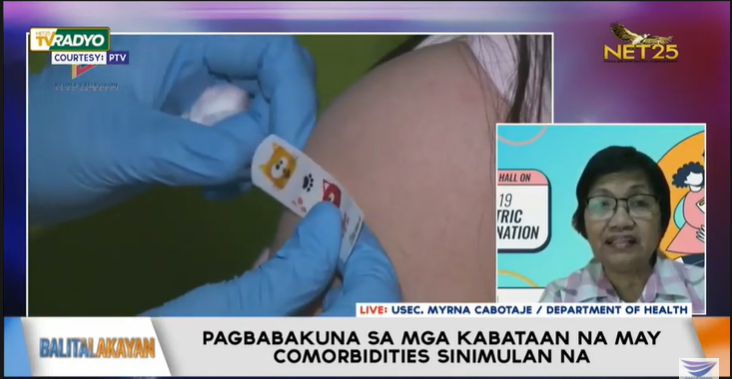 (Eagle News) — The Philippine government will expand the pediatric vaccination of children aged 12 to 17 with comorbidities to all local government units in Metro Manila starting October 22.

This was after the successful first day of vaccination rollout of more than 1,000 children (1,031) with comorbidites in eight hospitals in the capital region.

Health Undersecretary Myrna Cabotaje said that the Philippine Heart Center (347 vaccinated) and the Makati Medical Center (237 vaccinated) had the highest number of kids vaccinated among the eight hospitals which participated in the initial rollout.

Cabotaje said that next Wednesday, October 20, they would assess the initial rollout, and already start the vaccination of adolescents with comorbidities in at least one hospital per LGU in Metro Manila next Friday, Oct. 22.

In an interview with the NET25-Radyo Agila program on Friday, Oct. 15, Cabotaje said that on Wednesday, they will discuss if there were problems that arose in the pediatric vaccination so far, and discuss how this could be improved.

And next Friday, exactly a week after the pediatric A3 (adolescents with comorbidities) rollout, they will expand the vaccination to all Metro Manila cities or LGUs.

She said many private hospitals had also expressed interest to join in the vaccination drive of the 12 to 17 year olds.

Cabotaje said that they are not giving any timeline to the hospitals. Each hospital is given a tray of Pfizer doses which contains 1,000 doses.

If they use up all the doses, they would be given more vaccines. The DOH official noted that the country had so far been regularly receiving Pfizer doses.

So far, over 10 million Pfizer doses have already been delivered to the country.

Only Pfizer and Moderna vaccines have been given emergency use authorization (EUA) for children over 12 years old in the country.