Last January 30, 2015, Czech Ambassador Jaroslav Olša, jr. awarded the 3 Filipino students who participated in the 2014 International Children’s Exhibition of Fine Arts Lidice (ICEFA Lidice). The three students namely Justine Mae Sy, Jasmine Kate Tan (both from St Stephen’s High School) and Maria Angelica Tejada (Padre Burgos Elementary school) were chosen by the exhibitions committee in Lidice for  the awards of appreciation, which they received together with  gift  certificates from The Embassy of the Czech Republic in Manila. Their artworks were displayed in the Lidice Gallery in Lidice, Czech Republic from May to October 2014, alongside over 1,500 other works from children all over the world.

This symbolic yearly exhibit, established in 1967, commemorates the death of the children during the occupation of the German Nazis in the town of Lidice; as well as the death of other innocent children who have died in wars. This exhibition became known internationally in 1973, and since then it has become a recurring exhibit every year. Recently, more than 25,000 art works are being received not only from The Czech Republic and Slovakia, but also from other 60 – 70 countries, including China, India, Japan, Kenya, Malaysia, Philippines, Sri Lanka and Zimbabwe.

The Embassy of the Czech Republic – Manila is currently inviting Filipino students aged 4 to 16 years old, to participate in the 43rd International Children’s Exhibition of Fine Arts Lidice, this coming May 2015. Detailed instructions on how to join can be found here: http://www.mdvv-lidice.cz/en/current/invitation/.

Art teachers and interested parties may contact the Cultural Section of the Embassy to seek assistance  in the sending of entries to Lidice, Czech Republic directly. Kindly call the Embassy at 8111155 or send an email to manila@embassy.mzv.cz 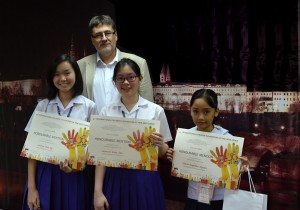