Protest actions continue as the United States President Barack Obama enters its second visit. The protests focus on the Enhanced Defense Cooperation Agreement signed by the United States and the Philippines. Click video for details. (Fort Bonifacio) – Amid shaking hands and taking ‘selfies’ with Filipino and American soldiers, President Barack Obama honored war veterans at a gymnasium in Fort Bonifacio and affirmed that their commitment to defend the Philippines is “iron clad”. In a short speech which lasted a little over five minutes, Obama promised that the U.S. would be there for the Philippines if ever the country was in need of help in terms of calamity or […] 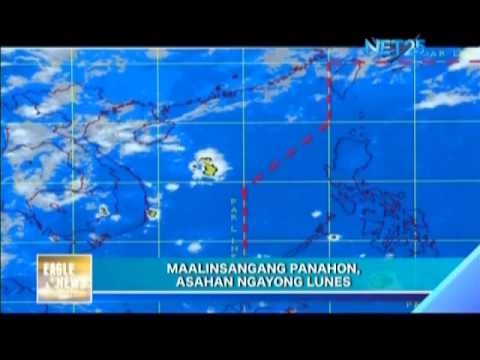 Due to the easterlies, the Philippines will continue to experience hot and humid weather with isolated rain showers in the afternoon. Click video for more details. 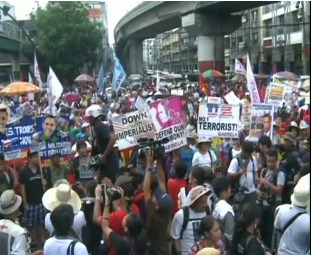 (Reuters) — Nearly 800 Philippine protesters gathered near the Malacanang Palace in Manila on Monday to condemn a newly signed defense pact with the United States. The Philippines and the United States signed on Monday a 10-year defense pact that would expand the rotational presence of U.S. forces in the country, making the deal just a few hours before the expected arrival of U.S. President Barack Obama for a state visit. The “Enhanced Defense Cooperation Agreement” (EDCA) was signed by Philippine Defense […] 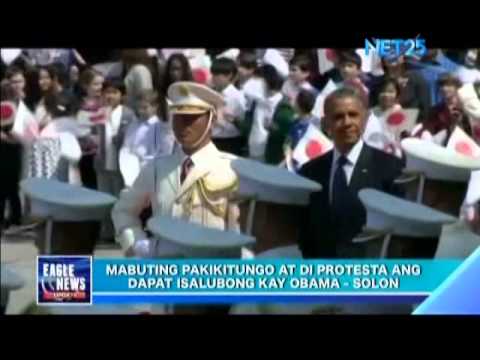 ‘Filipinos should show some gratitude’ – Congressman

Leyte Representative Ferdinand Martin Romualdez said that Filipinos should welcome United States President Barack Obama with our famous hospitality, instead of mass protests,  in gratitude to the US support during the aftermath of Typhoon Yolanda as well as their continued help in the West Philippine issue. The U.S. government was one of the countries who gave the Philippines some much needed help during the said storm that ravaged parts of the Visayas region. Despite several protests […] 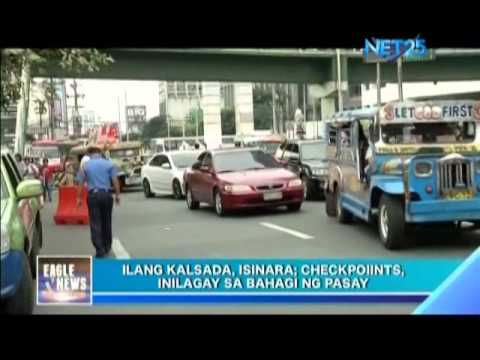 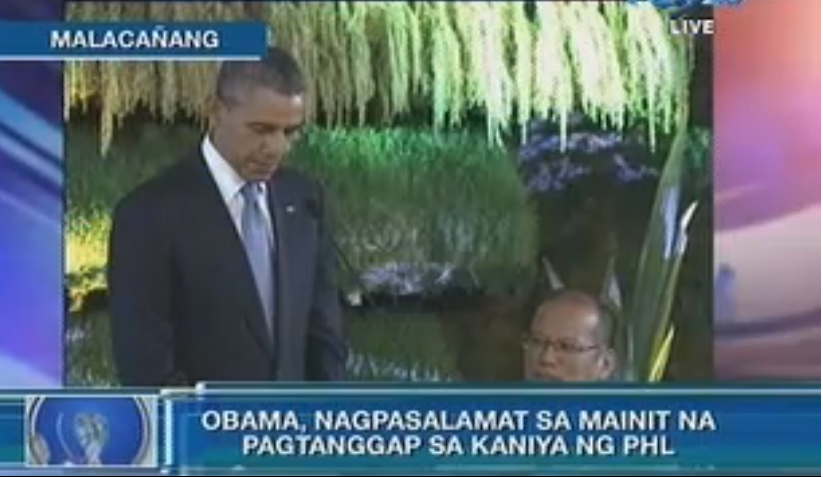 Obama thanks Filipinos for their hospitality

MANILA, Philippines April 28 (ENS) —  United States President Barack Obama thanked Filipinos for their hospitality in a state dinner in Malacanang Monday night. Obama arrived at around 7:30 p.m. after a brief rest at his hotel.  He was led by President Benigno Aquino III to the state dinner room. In a speech before the state dinner, the  44th U.S. President noted that he has had a taste of Philippine adobo back in the White […] MANILA, April 28 (PNA) — United States President Barack Obama said the newly signed Enhanced Defense Cooperation Agreement (EDCA) between the US and the Philippines will benefit the two countries, particularly on military readiness and response to calamities. In a press conference with President Benigno S. Aquino III in Malacanang on Monday, Obama said the goal of the new defense cooperation agreement is wide-ranging. The US President said that both countries have maintained strong alliance […] Obama: U.S.’ role is to deploy military force only as a last resort

MANILA, Philippines April 28  (ENS) — United States President Barack Obama stressed his country’s’ role in an increasingly turbulent world situation as one wherein military force would only be used as a “last resort.” In a joint press conference with Philippine President Benigno Aquino III in Malacanang, Obama said that there would always be territorial disputes around the world but the use of military force had been proven by history as something that should be […] MANILA, Philippines — United States President Barack Obama and Philippine President Benigno Aquino III started bilateral meetings, along with officials from both sides, in Malacanang at around 2:30 p.m. Before this, Obama signed the official guestbook in Malacanang. Both leaders appeared to be in high spirits as they discussed issues during the meeting. Security and trade issues are expected to be discussed in the meeting. Later in the afternoon, both Obama and Aquino were expected to […] 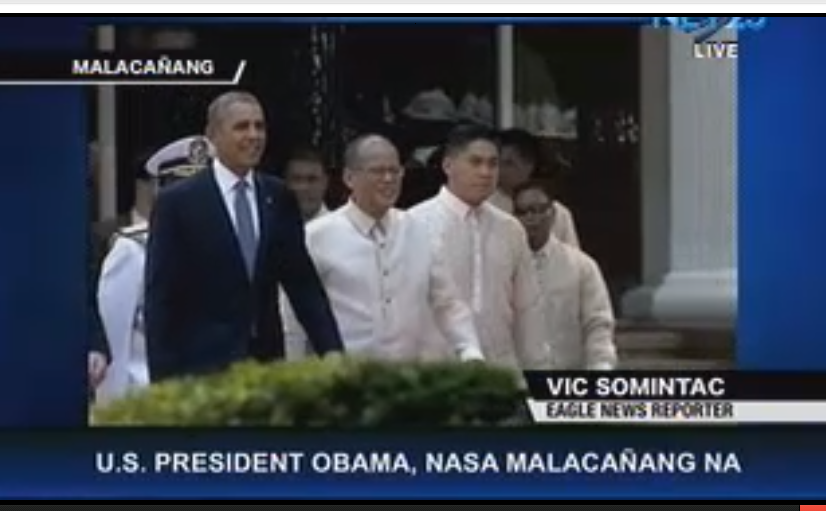 MANILA, Philippines — United States President Barack Obama arrived in Malacanang shortly after 2 p.m. aboard a black limousine.  He was immediately greeted by the President Aquino.  Arrival honors ensued with a 21-gun salute. President Aquino led the warm welcome for the US head of state amid the sweltering heat. President Obama is expected to participate in a joint press conference with President Aquino later at around 3:45 p.m.  At around 5 p.m., he is […] 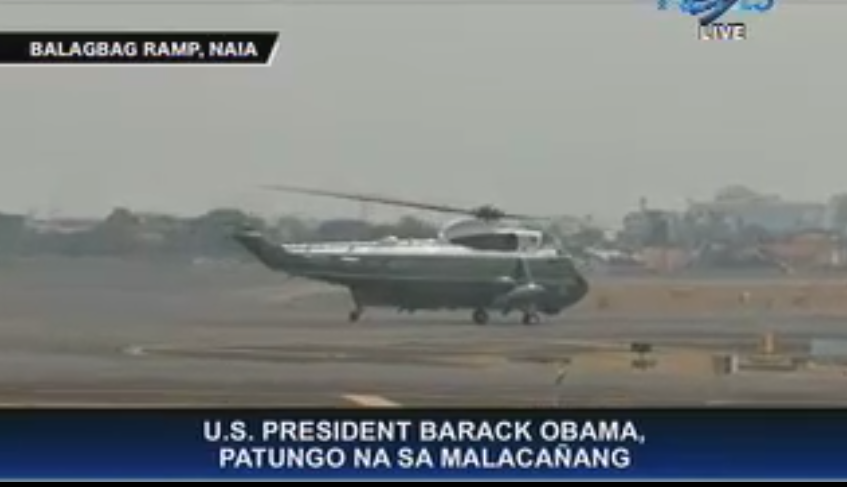 MANILA, Philippines — The United States’ Air Force One  landed at the Ninoy Aquino International Airport around 1:30 p.m.with U.S. President Barack Obama on board.  Obama disembarked from the plane and was greeted by Philippine officials.  He came from his visit in Malaysia. The U.S. President then boarded a US presidential chopper which will bring him to Malacanang where Philippine President Benigno Aquino III will be leading the welcome ceremony for the U.S. head of […]