Japanese Ambassador Kazuhide Ishikawa and Mr. Nobuyuki Nakaya, country representative of SEEDS Asia, a Japanese NGO, signed the grant contract for the “Project on raising awareness for disaster risk reduction by Mobile Knowledge Resource Center (MKRC)” at the Embassy of Japan onJanuary 20, 2015. The project, amounting to US$ 175,326 (approximately 7.7 million pesos), is funded through the Grant Assistance for Japanese NGO Projects, a small-grant funding program of Japan’s Official Development Assistance (ODA).

The Republic of the Philippines is a disaster prone country like Japan and the necessity of disaster risk reduction (DRR) efforts is increasing. In particular, raising awareness of people for DRR is one of the most important points to reduce damages by natural disasters. In this project, SEEDS Asia is going to facilitate teaching activities using MKRC to raise awareness for DRR in Makati City, which has high population and some high-risk flood areas. All 33 barangays are targeted for this project. The Embassy hopes the effect of the project will be maximized with positive participation by the local community. 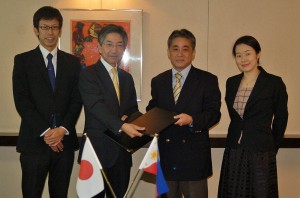