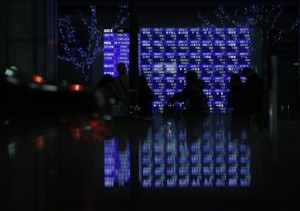 Investors took heart from the strong performance on Wall Street and lifted MSCI’s broadest index of Asia-Pacific shares outside Japan about 0.8 percent.

Chinese exports handily beat expectations in January, rising 10.6 percent from a year earlier, while imports jumped 10 percent, leaving the country with a trade surplus of $31.9 billion for the month.

“The trade figures were a bit of a surprise to the market,” said Zhou Hao, an economist at ANZ in Shanghai. “The stronger-than-expected exports data also showed improvement in the global demand momentum.”

The buoyant mood offset the impact of a much weaker-than-expected report on Japanese machinery orders, which is a leading indicator of capital expenditure.

The Dow Jones industrial average ended Tuesday up 1.22 percent, while the S&P 500 gained 1.11 percent to post its best four-day performance in 13 months.

Stocks in Canada, Europe and emerging markets also rallied as Yellen was careful to rock no boats in her first testimony to Congress.

“Continuity in policy is the main message from Fed Chair Yellen’s testimony,” said John Peters, a senior economist at Commonwealth Bank of Australia in Sydney. “Equities did well in reaction to the Fed sticking with its relatively upbeat outlook on the economy.”

“Crucially, the Fed hasn’t downgraded its view on the U.S. recovery in light of recent data releases or volatility in markets,” he added. “Further QE tapering is on the cards at upcoming FOMC meetings and U.S. yields should continue to rise.”

The yields on 10-year Treasury notes pushed to two-week highs, rising to 2.724 percent from Tuesday’s U.S. close of 2.717 percent.

Sentiment got a further lift from news that the U.S. House of Representatives had passed legislation increasing Washington’s borrowing authority, removing the danger of default.

Stabilization in emerging markets also helped after the turmoil of January. The Turkish lira and the South African rand have been grinding steadily higher for the past two weeks.

The calmer mood was reflected in the VIX index of volatility, which dived 4.9 percent to 14.51, pulling sharply away from its recent peak at 21.48.

The Australian dollar benefited from the better-than-expected Chinese trade report, adding 0.2 percent to $0.9054 and also edging up against the yen to 92.86.

The U.S. dollar was nearly flat on the day against its Japanese counterpart at 102.59, holding onto its gains made in the previous session after Yellen’s remarks, while the euro was also steady, at $1.3632.

The single currency could be affected by a speech by European Central Bank President Mario Draghi later on Wednesday, while the Bank of England releases a report on inflation which should include an overhaul of forward guidance. {ID:nL3N0LG2GO]

In commodity markets, spot gold fell 0.4 percent to $1,285.49 an ounce, snapping a three-day winning streak and giving back some of its sharp overnight gains as stocks rallied. But it was still not far from a three-month high of $1,293.44 hit on Tuesday.

Brent crude rose about 0.1 percent to $108.75 a barrel, while U.S. crude gained 0.3 percent to $100.27, also bolstered by data from the American Petroleum Institute showing crude stocks fell by 2.5 million barrels at a key U.S. delivery hub, and by expectations of increased U.S. demand due to cold weather.

Three-month copper on the London Metal Exchange rose 0.6 percent to $7,121.25 a ton, reversing losses from the previous session and moving away from a two-month low of $7,016 touched on February 4.