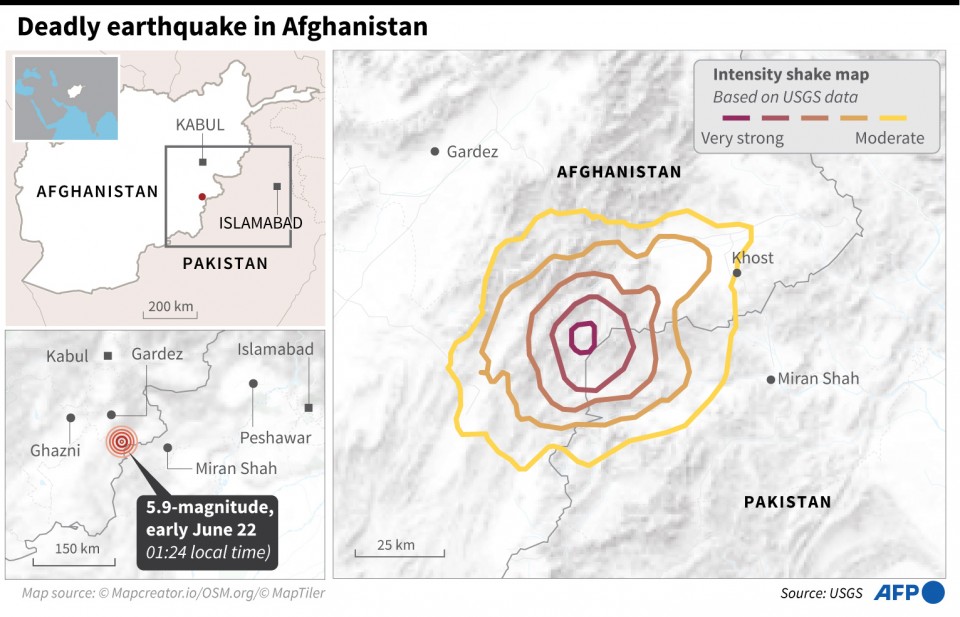 The 5.9 magnitude quake struck hardest in the rugged east, where people already lead hardscrabble lives in a country in the grip of a humanitarian disaster made worse by the Taliban takeover in August.

#BREAKING;
More than 1000 people were killed and over 1500 others injured in Tuesday night’s #earthquake in #Gayan and #Barmal district of #Paktika province alone, Head of Information and Culture Department of the province told BNA.
The death toll is likely to rise, he added. pic.twitter.com/mI8HZy6SFX

“People are digging grave after grave,” said Mohammad Amin Huzaifa, head of the Information and Culture Department in hard-hit Paktika, adding that at least 1,000 people had died in that province alone.  “It is raining also, and all houses are destroyed. People are still trapped under the rubble,” he told journalists.

The death toll climbed steadily all day as news of casualties filtered in from hard-to-reach areas in the mountains, and the country’s supreme leader, Hibatullah Akhundzada, warned it would likely rise further.

Earlier, a tribal leader from Paktika said survivors and rescuers were scrambling to help those affected.

“The local markets are closed and all the people have rushed to the affected areas,” Yaqub Manzor told AFP by telephone.

Even before the Taliban takeover, Afghanistan’s emergency response teams were stretched to deal with the natural disasters that frequently struck the country.

But with only a handful of airworthy planes and helicopters left since the hardline Islamists returned to power, any immediate response to the latest catastrophe is further limited.

“The government is working within its capabilities,” tweeted Anas Haqqani, a senior Taliban official.

“We hope that the International Community & aid agencies will also help our people in this dire situation.”

The United Nations and European Union were quick to offer assistance.

“Inter-agency assessment teams have already been deployed to a number of affected areas,” the UN Office for the Coordination of Humanitarian Affairs (UNOCHA) in Afghanistan tweeted.

Tomas Niklasson, EU special envoy for Afghanistan, tweeted: “The EU is monitoring the situation and stands ready to coordinate and provide EU emergency assistance to people and communities affected.”

Afghanistan is frequently hit by earthquakes — especially in the Hindu Kush mountain range, which lies near the junction of the Eurasian and Indian tectonic plates.

Scores of people were killed and injured in January when two quakes struck rural areas in the western province of Badghis, damaging hundreds of buildings.

In 2015, more than 380 people were killed in Pakistan and Afghanistan when a 7.5-magnitude earthquake ripped across the two countries, with the bulk of the deaths in Pakistan.

Aid agencies and the United Nations say Afghanistan needs billions of dollars this year to tackle its ongoing humanitarian crisis.

Aid agencies have particularly stressed the need for greater disaster preparedness in Afghanistan, which remains extremely susceptible to recurring earthquakes, floods and landslides.

The quake was felt as far away as Lahore in Pakistan, 480 kilometres (300 miles) from the epicentre, according to responses posted on the USGS and European Mediterranean Seismological Centre (EMSC) websites.