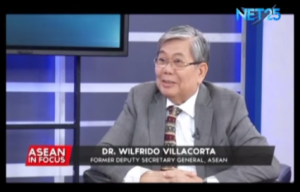 (Eagle News) — The former deputy secretary general of the Association Of Southeast Asian Nations (ASEAN)  Dr. Wilfrido Villacorta, talks about the ASEAN integration in this episode of ASEAN in Focus, a NET 25 program that focuses on the ASEAN region.

He has now reassumed his position as professor emeritus of international relations and university fellow at De La Salle University in Manila, where he also served as dean and senior vice president.