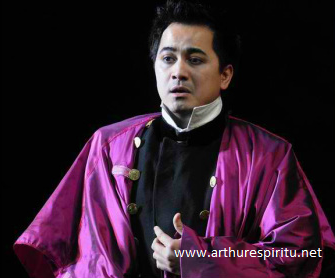 After a series of successful performances in Europe, the country’s premier tenor Arthur Espiritu returns to perform in MCOF’s production of Mostly Mozart 2014 on July 11, 2014 at 8:00 p.m. at the Philippine Stock Exchange Auditorium, Tektite Tower, Ortigas Center, Pasig City.

Fresh from his successful performances as Ernesto in Donizetti’s Don Pasquale in Leipzig, Fernando in Donizetti’s La Favorite in Theatre St. Gallen opposite today’s fast rising mezzo soprano Elena Maximova and the great baritone Paolo Gavenelli. But the highlight of his performances is in Baden-Baden as Edmondo in Puccini’s Manon Lescaut where he sang with the renowned dramatic soprano Eva-Maria Westbroek and conducted by Maestro Simon Rattle with the Berlin Philharmonic Orchestra. As the first Filipino of this generation to sung at most major opera houses in the world including Teatro alla Scala in Milan, Theatre des Champs Elysees in Paris, with the Israeli Opera, Teatro Comunale in Modena, Vienna Staatsoper, and in the U.S. with Opera North, Opera Memphis, the Pittsburg Opera, Santa Fe Opera and Opera Theater of St. Louis to name but a few. Another milestone is for being a winner of the prestigious vocal competition in Vienna, the Belvedere International Vocal Competition.

For this concert, Mr. Espiritu will perform two of the rarely performed Mozart’s Opus, the dramatic concert aria “Misero, o sogno” and the fiendish “Se vuoi che te raccolgano” from the opera “Il Sogno di Scipione”. Both works have never been performed in Manila for the past 30 years. He will be conducted by the sensational young conductor today, Maestro Darrell Ang with the Manila Symphony Orchestra.