Here is an exclusive interview of EBC Director for Sales and Marketing Caesar Vallejos (CRV) with the Tagisan Ng Galing’s Board of Judges composed of Imelda Papin, Marco Sison and Vina Morales on how they chose the final contestants.  It is also an insightful look at the judges’ conviction, experience and body of work that reflect their sound judgment and advice to the Final Five and the other contestants.

CRV:  Please describe your experience as a judge in Tagisan Ng Galing.

IMELDA PAPIN: As the head judge, I thank NET25 for trusting me. (The judges deliberated in choosing the top 5 finalists.) Talagang kailangan namin i-deliberate iyon. We have great performers and great talents. It is so hard to judge them, parang gusto nga namin na manalo sila lahat. But of course, we are just choosing five.

For me, since I started the show, nakita ko talaga ang galing ng mga Pilipino dahil iba-iba and kanilang mga acts: may acrobats, singing and dancing, billiard… all these ay galing talaga ng Filipinos. It is so amazing, dahil at the very start of the audition we have more than thousands of performers who would like to join Tagisan ng Galing.

We like all the performers at pwede tayong mag build-up ng talagang magagaling na talents. They are all great performers, but we only have to choose five and nahirapan talaga kami. 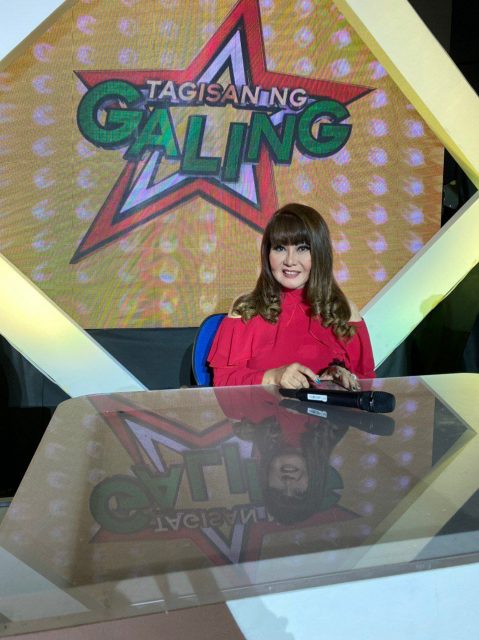 (Ms. Imelda Papin joined singing contests as a kid during her elementary days.  She joined the Bicol version of “Tawag ng Tanghalan” and became the champion for 13 weeks, undefeated. She landed 4th place in the grand finals.  She also had the Star Search franchise in the Philippines for two years. Her “Pasikatan sa Trese” was given the award as the best talent show. Ms. Imelda, as a professional singer, has also infiltrated Las Vegas, as solo performer and has also performed with other American artists.)

CRV:  The talent search happened during the time of COVID and the virus seemed not to limit Filipinos from joining the competition.  What’s your take on that?

(Note: Immediately after the government announced the ECQ, the EBC/NET25 Management canceled all live regional auditions and opened the online sending of videos. The audition at the Philippine Arena was conducted prior to the EQC announcement. From the online auditions, semi-finals and up to the grand finals, TNG is strictly enforcing social distancing and compliance to health protocols required by the government to avoid the spread of the virus, including the rapid and swab testing of contestants and production staff.)

MARCO SISON: Ang Pinoy ganon talaga. I don’t think any pandemic can stop a person, a Filipino when he is talented.

I remember when I was young, bumabagyo. Meron kaming pupuntahan na radio singing contest. Pumunta kami ng Nanay ko from Laguna. Galit na galit ang father ko kasi bumabagyo. That’s the Filipino way talaga, and there are many reasons why Filipinos are like that – number one reason is survival. Number two is yung gustong maipakita yung talent nila. Number three is hoping na someone will see you and help you and discover you and connect with you. I remember when we were doing this with my mother, ganun ang purpose namin. Pero syempre, it does not happen overnight. It takes time.

Filipinos, especially when he or she is talented, has a lot to offer. Filipinos are world-class when it comes to singing. Sa buong mundo, pag may Pilipino panigurado, may magaling.

Judging is never an easy job. Yung ‘galing’ is total.  But I am willing to give the opportunity to someone younger and has what it takes. Kasi, we’re talking of future here.

CRV:  In your experience as judge, how did you find Tagisan Ng Galing as a platform in showcasing various talents of different ages?

VINA MORALES: We were so surprised dahil ang daming talents na sumali…iba-iba yung genre na ginawa nila, iba-ibang ages and they gave their best. Even though we were affected by COVID, especially in our business, nahirapan kami kasi hindi namin sila nakakasama ng personal to judge them, they are all in remote (sites).

CRV: As a performer or a judge, how should one react in this era of social media bashing?

VINA MORALES:  As a judge, it’s really tough for us on deciding, having seen the great entertainers. We were able to judge the contestants based on their performances that day. Hindi naman perpekto lahat. No perfect performance. But you know na kaya nilang galingan pa in other performances.

You just have to be a good sport and be kind to everybody kasi we are really trying our best to really give a good score. I have my own score, and when we tally together, hindi mo alam kung sino ang mananalo talaga. Madami pang opportunities to compete again at galingan pa.

MARCO SISON: Pintasero din ako, lumaki kami sa kumpetisyon. When you are a competitor you don’t stop until you win. Galing kami sa zero. We all started from nothing. So why do you bash somebody dahil di ka nakuha? So try again. It’s not an overnight thing. Instead of bashing, i-encourage niyo ang inyong manok to compete more. Kasi talagang hindi ito madali, it took a miracle for us to produce a hit song. It happens by really working hard.

CRV: As an accomplished singer and music icon, what vision do you want to accomplish in the industry?

CRV: You are one of the country’s greatest hitmakers. What is your formula for creating hit songs?

MARCO SISON: It took me a while. I joined Student Canteen.  I became the champion but after that, nothing happened. Pag ina-analyze ko sya, I guess it was misdirection because nobody was handling me. I was all by myself. It took a while. Mahilig akong mag-artista, nag-artista ako. Kumbaga nade-focused ako. For artists like myself, it took me about seven years to have a hit song, That’s long. 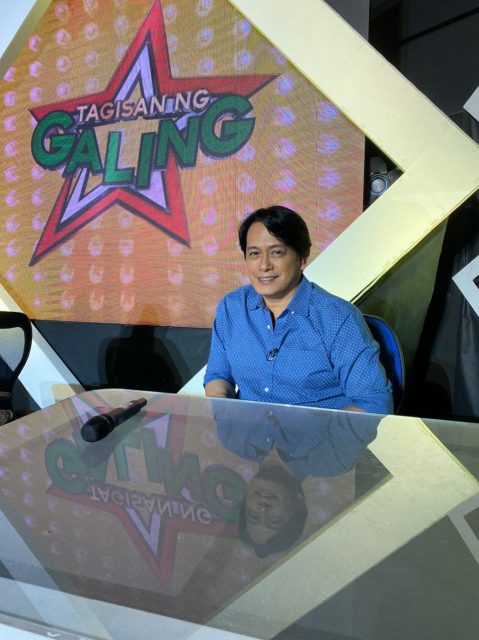 Maraming nagsasabi sa akin na overdue na ako but I didn’t stop. Something is going to happen to you as long as you are determined. When you think of it and declare it, it’s going to happen. Nagkaroon ako ng hit song, syempre dire-diretso na iyon, momentum iyon e. Once na naka-hit ka, you have to take advantage of it. Kasi mawawala yan after a while. Ngayon kung talagang ikaw ay magaling you are going to last.

First of all, have a good attitude. Nung bata ka, along the way, marami kang naka-away, somehow pagdating doon sa dulo, yun ang mga kaharap mo. Yun ang resulta. So whatever you do when you are young is the direct result when you get older. As far as my career is concerned, I have already completed my full circle. But I’m like starting all over again.

Hindi ko yun sinasabi publicly pero yun ang ambition ko. Pero one day,  if I walk up and I have another hit song, why not? Sabi nga nila, celebrities are powerful because they are treated like a princess or prince.  And “with great power comes with great responsibility.” Pag binigay as akin iyon, ready ako. Gusto ko ma-stretch ko yung set of hit songs to another set of hit songs.

CRV: Due to the pandemic, a lot of actors, entertainers and singers are losing a lot of opportunities, what is your message to them? 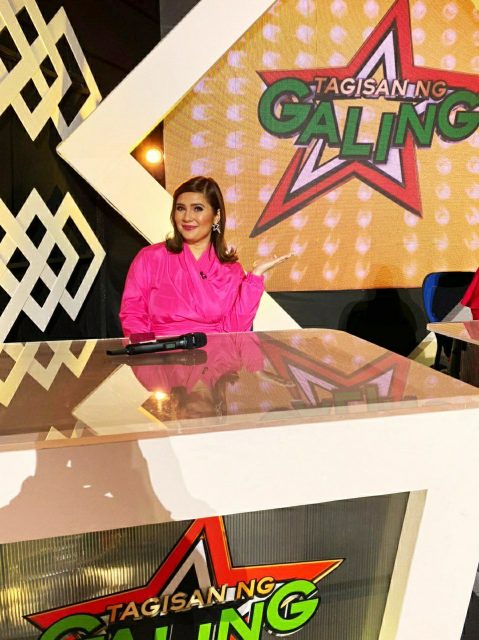 VINA MORALES: You know that really worries me. That’s my fear. Iniisip ko, ano kayang future ng anak ko. With what’s happening now parang our world stopped and now we are starting all over again. But then we realized, we just have to move on. This if life. We have to move on. We never stop dreaming. Never lose hope. Let go and let God. Dapat right now, hindi tayo nawawalan ng pag-asa because there is always hope, we know that God will always take care of us. Everything happens for a reason. Maybe right now, we have to slow down a little bit. Masyado na atang mabilis ang buhay natin, kung paano natin ginagawa yung routine natin.

I guess now is the time to really to think it over and realize that our family is really important. Spending quality time with them, yung dreams natin, of course, nandyan lang naman yan but still mas alam natin ngayon yung priorities natin. We have a lot of dreams.  Hindi tayo na sa-satisfy but then, we realized na ang importante pala talaga is yung mga taong nagmamahal sa atin, pamilya natin, mga kaibigan natin.

We all have the time in the world, but then ang na-realize ko – yung spending time with your family and your loved ones and taking good care of yourself, loving yourself more than anyone else and of course, loving God.

CRV: What is your message to the Final Five and to the other contestants?

MARCO SISON:  Doon po contestants, galingan niyo pa.  Be always prepared and always be ready because this is not going to be easy for you and for all of us. For us,  winners kayong lahat.  The fact na makarating kayo sa Top 30, Top 15, you are already a winner. Sa EBC at NET25, honestly, tumawag po kayo during COVID time.   I was getting worried already. But when you guys called, wow,  sumarap yung feeling ko. Finally, natupad na rin yung gusto kong mangyari na maging judge ng isang singing contest on TV. Thank you so much, EBC and NET25 for the trust and I’m going to do my job 120%!

Sa Tagisan ng Galing, maraming maraming salamat for giving me the trust to be one of your hurados.

VINA MORALES: Sa lahat ng mga contestants, sa mga di napili, there’s a lot of chances na mangyayari, a lot of opportunities dahil umpisa pa lang ito ng TNG. Actually, pwede kayo ulit sumali, maging contestants ulit and make it better in each performance. To all our top 5, congratulations to all of you. We know that you all worked hard to be on that level, maging part ng Top 5. But then, huwag masyadong mag-relax because we are talking of 2 million grand prize. Kailangan mag-improve ng mag-improve ang every performance ninyo.

Ako po’y nagpapasalamat sa EBC and NET25 for making me part of Tagisan ng Galing. When they called me, I’m so happy, I’m so grateful, I told myself, Oh my God, thank you, it is such a blessing. I’m getting to work again despite of the COVID threats.

Here’s how YOU can choose the final winner of TAGISAN NG GALING: