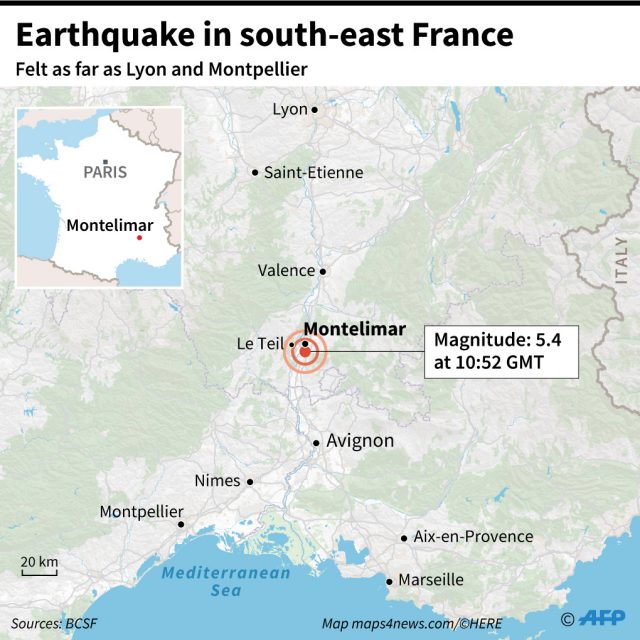 A physicist at a geophysics institute the IPGP said that quakes of this strength are rare in that region, but warned of possible aftershocks and said people should leave fragile buildings.

The quake, with a magnitude of 5.4, was felt in a vast area between the cities of Lyon and Montelimar which are about 150 kilometers (93 miles) apart, the national seismological office said.

“I was leaning against the oven in my mother’s bakery when I felt the tremor,” said Victoria Brielle, a resident in Privas, some 25 kilometers from the quake’s epicenter.

“A customer said her sideboard had moved and all her crockery was broken,” she said.

Another resident in the area, Didier Levy, who lives in a 15th-century castle, told AFP that “chandeliers were still trembling” several minutes after the quake.

Levy, who said his dog starting barking even before humans felt the tremors, added: “I have never experienced anything like it, I could feel the trembling even though these walls are one meter thick.”

One person was seriously hurt when some scaffolding collapsed, the regional prefect’s office said.

Three other people in the neighboring Ardeche region were slightly injured.

Quakes in this region are rarely higher than Magnitude 5, said Mustapha Meghraoui of the IPGP’s office in Strasbourg.

“We can say that this is a rare one,” he added. But he said there might be an aftershock of around 4.5.

“If people are in a fragile house, they would be better leaving it” for something more robust for a while, he said.

The scale of the damage suggested the quake happened at a depth of between five and 10 kilometers, he added. But they were working on a more accurate reading.