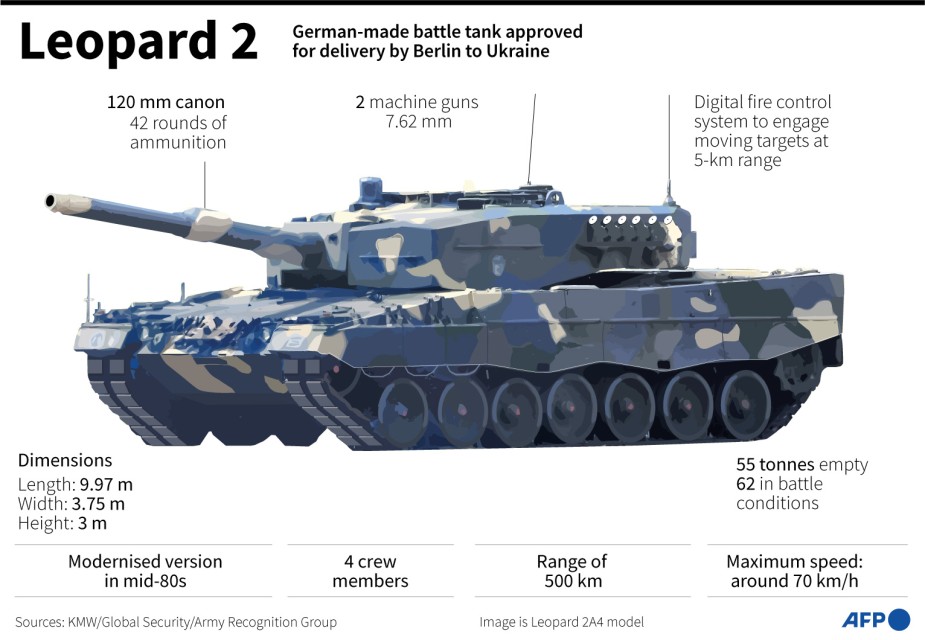 Spain said Wednesday it was ready to send some of its German-made Leopard tanks to bolster Ukraine’s fight against Russia after Berlin granted approval for their European transfers.

“Spain is ready… to deal with our allies in any way necessary, whether that means sending Leopards, training in the use of Leopards or help in their maintenance and upkeep,” Defence Minister Margarita Robles said.

Her remarks came shortly after Berlin said it would send some of its own Leopards to Kyiv and cleared other European nations to send their own stocks to Ukraine.

Robles did not specify numbers or give a delivery date but said Spain would assess what it could provide in terms of hardware and training, so Ukraine’s troops could use the complex battle tanks.

“While it’s true Spain has Leopards, the vast majority of those which could be delivered, need to undergo an upgrade,” she said.

“We’ll have a look at the material we have because some of (tanks) need upgrading while others are in such a bad state that they can’t be handed over.”

According to the International Institute for Strategic Studies (IISS), the Spanish military has 327 Leopard battle tanks, making it one of the armies with the largest number.

El Pais daily said 108 of them were Leopard 2A4s bought second-hand from Germany in 1995.

The other 239 were Leopard 2E combat tanks, a variant of Germany’s Leopard adapted by the Spanish military and built in Spain, it said.

More than half of the older 2A4s were placed in storage more than a decade ago to prevent their deterioration, El Pais said, quoting Robles as saying last year that they were in “a deplorable state”.

On Wednesday, Robles said the tanks would be assessed to see which were fit for deployment.

“The important thing is to have a technical evaluation to determine which ones can be handed over… pending this fourth upgrade, which is an operational upgrade, then we will act in coordination with our allies,” she said.

Russia denounced Berlin’s decision to approve deliveries of Leopard tanks to Ukraine as “extremely dangerous”, warning it would take the conflict “to a new level of confrontation”.

Moscow’s warning was echoed by Spain’s hard-left Podemos, the junior partner in Spain’s left-wing coalition, which has repeatedly opposed the sending of arms to Ukraine.

“Many experts are warning that the deployment of Leopards would only contribute to the escalation of war and could trigger an unpredictable and very dangerous response from Russia,” Podemos leader Ione Belarra told Spain’s public television.

“Peace will come through negotiation and de-escalation and that is what Spain should focus on.”

Germany’s announcement comes after weeks of pressure from Ukraine and many of the countries supporting it.

Kyiv had been seeking the tanks, which it sees as crucial for punching through enemy lines in the nearly year-long war, for months.

A recent IISS analysis concluded that if Kyiv was to receive about 100 such tanks, the effect could be “significant”.