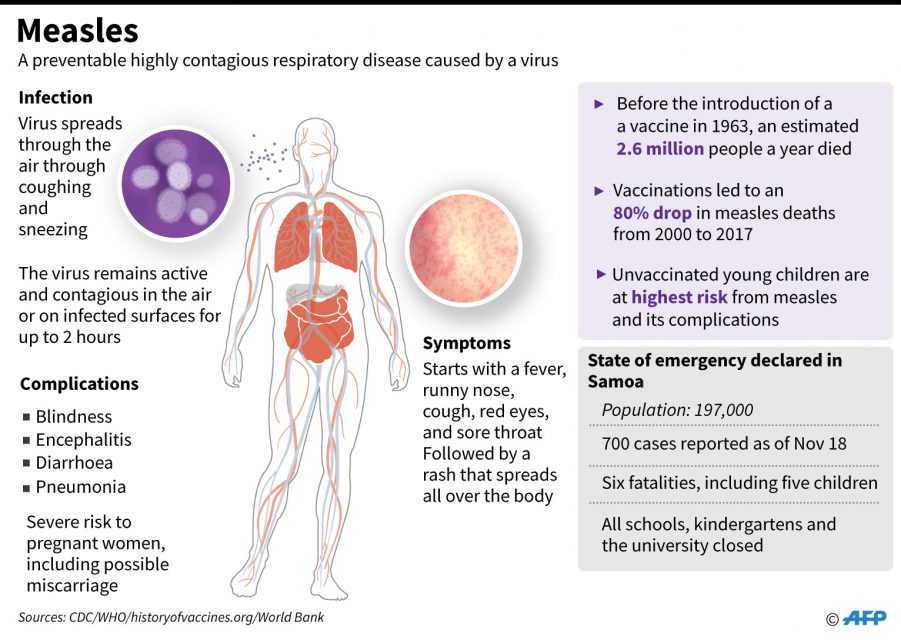 WELLINGTON, New Zealand (AFP) — The death toll from a measles epidemic in Samoa has risen to 20 as the outbreak rages out of control, with hundreds of new cases emerging daily, official data released Friday showed.

The government said there were 1,644 cases, with 202 diagnosed since Thursday, most affecting young children.

It said the number of deaths had hit 20, including 19 children aged under four years old.

An additional 11 children are critically ill in the hospital.

Samoa has declared a state of emergency as it tries to contain the outbreak, launching a compulsory vaccination program, closing schools and banning children from public gatherings.

Australia and New Zealand have sent medical specialists and supplies, while the UN children’s agency UNICEF is distributing more than 110,000 doses of measles vaccine to Samoa’s population of about 200,000.

Tonga and Fiji have also experienced outbreaks, although much less severe and without any deaths so far due to higher vaccination rates among the population.

UNICEF estimates Samoa’s vaccination rate is 28-40 percent, while in Tonga and Fiji they are 99 percent and 81 percent respectively.