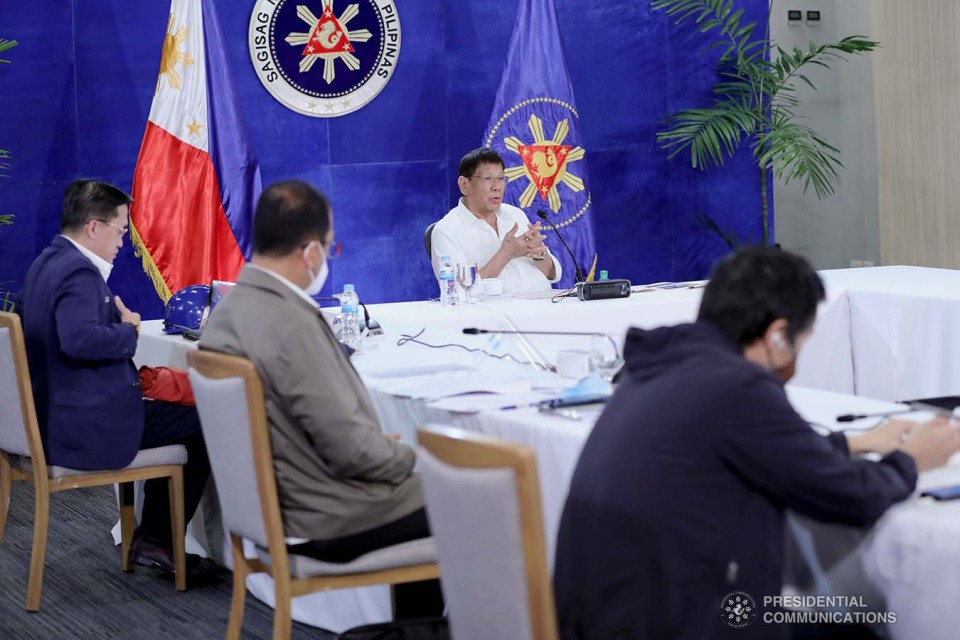 President Rodrigo Roa Duterte presides over a meeting with the Inter-Agency Task Force on the Emerging Infectious Diseases (IATF-EID) core members prior to his talk to the people at the Arcadia Active Lifestyle Center in Matina, Davao City on September 22, 2021. ARMAN BAYLON/ PRESIDENTIAL PHOTO

(Eagle News) – President Rodrigo Duterte has directed the Armed Forces of the Philippines (AFP) and the Philippine National Police (PNP) to send in their nurses and doctors to help public and private hospitals whose medical staff had been placed on quarantine due to COVID-19.

President Duterte noted how the country’s “hospitals are being filled to the brim” and “running at full capacity,” with their health workers placed on quarantine after being infected with the virus.

He gave the order in his latest “Talk To The People” where he directed Defense Secretary Delfin Lorenzana and PNP chief Guillermo Eleazar for their medical personnel to immediately aid the country’s hospitals struggling with a surge in COVID cases.

“Kaya I’m appealing to, well, one is that I am ordering – nasabi na man ito, but again, I am reiterating tutal nandiyan man nakiking si General Lorenzana — that I am ordering the medical corps of the Armed Forces of the Philippines and the Philippine National Police, si Chief, if you are listening to me now, please play — please place your human resources on ready, on deck because talagang, alam mo, ‘yan talaga ang — ‘yan ang madali kong maasahan,” he said.

The President also mentioned some of the large private and public hospitals which need help as he again hit the Senate Blue Ribbon Committee for its ongoing hearings investigating the government’s COVID-19 response, particularly that of the Department of Health.

-Duterte notes “our healthcare workers are getting sick”-

“While the Senate Blue Ribbon Committee hearings keep on going uselessly, our government workers are being impaired – our healthcare workers are getting sick, our hospitals are being filled to the brim and more of our people are getting sick and dying from COVID-19,” he said in his “Talk to the People” that was aired the following day, Sept. 23.

“If only these honorable Senators of the Committee will care to take a look, they will find that many of our hospitals and public hospitals — public and private, such as the St. Luke’s Medical Center, Cardinal Santos Medical Center, UERM, Medical City and the Philippine Heart Center are already running at full capacity,” he said.

Duterte noted how the whole COVID ward in St. Lukes’ hospital had to be closed due to the health workers getting sick too.

“I don’t know but what I heard, the latest is that ang St. Luke’s nagsara ang isang ward. Sinara — sinara na nila. Walang tao. We have a dearth of supply of the human resource,” he said.

Secretary Vince Dizon, the deputy chief implementer of the National Task Force Against COVID-19, confirmed how the country’s hospitals are struggling in the face of increase in virus cases due to the highly aggressive and infectious Delta variant.

He told President Duterte that the situation is hospitals were “very worrisome” that he and NTF chief implementer Secretary Carlito Galvez Jr., would be checking these hospitals.

In fact, many of the big private hospitals are closing down COVID wards due to lack of health workers, he said. Dizon observed this is the country’s “biggest challenge now.”

“Gusto lang ho naming i-reiterate ni Sec. Galvez na in the next few days po we will both be visiting the hospitals kasi nga po it’s very worrisome ‘yung report niyo kanina about many of our hospitals including the private hospitals — ito na po ‘yung pinakamalalaki at pinakamagagandang ospital natin — are closing down COVID wards because of the lack of healthcare workers,” Dizon said.

The Delta variant is now taking its toll on health workers, as many of them are getting sick even if most of them are already fully vaccinated against COVID-19.

Dizon noted that hospitals really needed assistance at this time.

“We have to understand as the numbers show, we are not out of the woods sa Delta variant or even if there seems to be a decline — slight decline in cases, these cases are still very high. And our hospitals are still overburdened. But the most worrisome problem is the healthcare workers getting sick, Mr. President, and we really need to augment and help them and really assist our hospitals as much as we can,” he said.

Since August 19, the ICU occupancy in the hospitals in the country, and in Metro Manila, has been at over 70 percent mostly.

Data from the Department of Health (DOH) showed that ward bed occupancy has also been at mostly 70 percent and above since that time.

Defense Secretary Lorenzana, in response to President Duterte’s order, said that he had already directed the AFP surgeon general to coordinate with St. Lukes hospital.

In fact, he said, Health Secretary Francisco Duque III had already approached him on this so that they could augment the medical staff in St. Lukes.

Lorenzana said that they would also be getting AFP nurses from the provinces to assist the hospitals in Metro Manila.