(Eagle News) – New Era University (NEU) was one of two schools that ranked no. 1 in the Professional Regulation Commission’s list of top performing schools in the country based on the results of the latest Real Estate Appraisers Licensure Examination.

The PRC said that NEU garnered 100 percent passing rate in the September 2021 Real Estate Appraiser Licensure Examination, along with another school, the Cronasia Foundation College Inc., in General Santos City.

All the examinees of both schools passed the licensure exams, and each also had a graduate that made it to the top 10.

The NEU posted a 100 percent passing rate for five of its examinees, with one of them, Lilia Salazar, placing 8th in the said licensure examinations, with a score of 84.5 percent.

The Cronasia Foundation College Inc., also garnered a 100 percent passing rate with seven examinees, one of whom, Jed Cua Romero, placing fifth with a score of 86 percent.

Because of this, both New Era University and Cronasia Foundation College Inc., shared rank 1 in the PRC’s list of top perfoming schools for the September 2021 Real Estate Appraisers Licensure Exam (REALE). 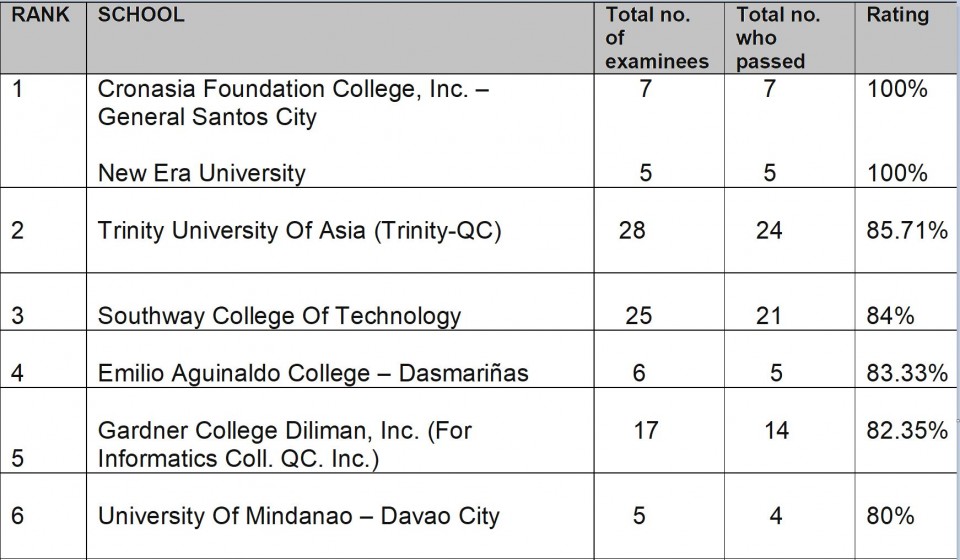 A graduate from University of Cebu, Juliefe Cuenca, topped the licensure exams with a score of 90.5 percent.

-Performance in other licensure exams-

The New Era University said that for three consecutive years, from 2019 to 2021, its College of Medicine had also achieved a 100 percent passing rate in the Physician Licensure Examination.

The six graduates of the NEU’s College of Medicine all passed the PLE last March 2021.

The NEU College of Nursing has also been listed as one of the top performing schools for nursing, having consistently achieved a 100 percent passing rate from 2015 to 2019 in the Philippine Nursing Licensure Examinations (PNLE).

NEU President Dr. Nilo Rosas said that these achievements were all because of God’s help.