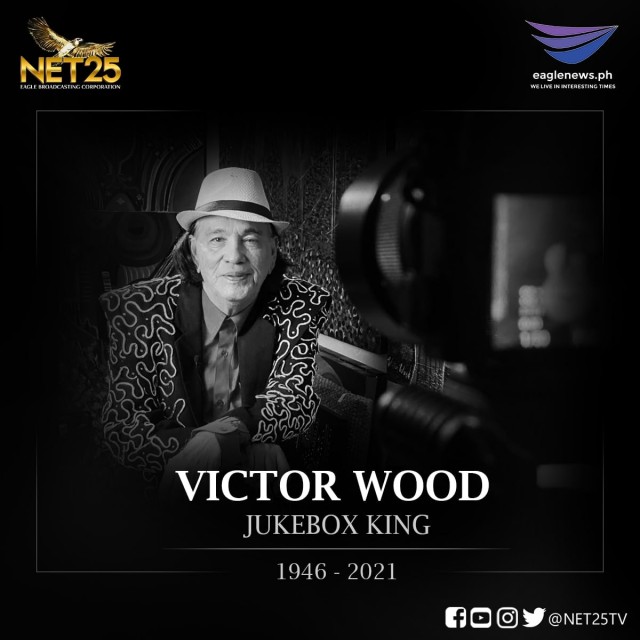 (Eagle News) – The country’s “Jukebox King” Victor Wood, one of the pillars of Philippine music, passed away on Friday, April 23. He was 75.

The legendary singer of the 1970s who turned hit songs one after the other such as “I’m Sorry My Love,” “Eternally,” “Carmelita,” and a string of popular American songs, as well as Visayan and Filipino love songs, gained fame and popularity for his singing style, voice, and good looks.

He also starred in films together with female stars of the time such as Amalia Fuentes and Nora Aunor in the 1970s.

Aside from singing and acting, Wood was also into painting.  He was in fact a prolific painter in his late years, and produced many artwork this pandemic, mostly abstract-impressionist paintings.

In later years, he hosted a show, Beautiful Sunday, in NET 25, and also appeared and sang songs in “HImig ng Lahi” another NET25 show promoting Filipino music. He also had a regular radio program in DZEC Radyo Agila, “Victor Wood By Request.”

In one of his interviews last year, Victor Wood said he is sharing his life’s story in a film dedicated to his fans.

He also thanked the people who had been a part of his life.

During the celebration of his 75th birthday last February, Victor Wood said that he is thankful to God for all the blessings he received in his life.  In a video of the birthday celebration where he was surprised by his family, he advised his children and friends to always pray and be thankful to God.

Victor Wood is survived by his wife, Nerissa, and children including Simon, Sydney and Victoria