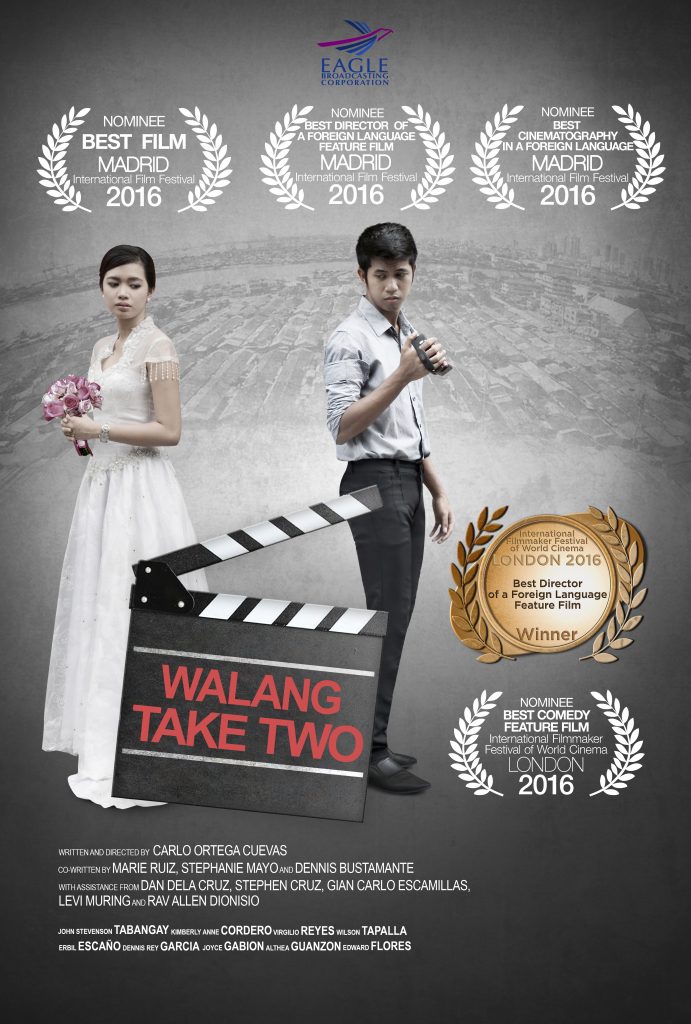 (Eagle News) — The Philippines’ entry from INCinema, “Walang Take Two” has won the Platinum World Awards and Golden World Awards at the World Film Awards in Jakarta, aside from being nominated for Best Picture this 2016.

The awarding ceremonies will be held in Jakarta, Indonesia on May 30.  (See link:  http://worldfilmawards.org/winners.htm)

These new awards are in addition to the London International Film Festival Award for best director in a foreign film for “Walang Take Two” director Carlo Jay Ortega Cuevas.

Aside from this, the film — which was produced by the Iglesia Ni Cristo’s INCinema productions — was also recently nominated for Best Film, Best Director of a Foreign Language Feature Film, and Best Cinematography in a Foreign Language Film at the prestigious Madrid International Film Festival.

These most recent awards prove that a Filipino-produced independent film can make it big in the international arena.

The people behind “Walang Take Two” led by its director Carlo Cuevas consider all of these as blessings from God.

“This is all for God’s glory.  Again, we thank the INC Executive Minister Brother Eduardo V. Manalo for giving us a chance to produce this film,” Cuevas said.

The announcement was recently sent to the film’s producers.

But the winner for the “Best Picture” category where it was also nominated, will be known on the awards night itself on May 30 in Jakarta.

Meanwhile, the winners of the Madrid International Film Festival, where “Walang Take Two” has also been nominated for Best Film, Best Director and Best Cinematography in a Foreign Language Film, will be known on July 2 during the awards night in Madrid, Spain.

“Walang Take Two” currently has a spin-off situational comedy series, “Hapi ang Buhay”, being shown on Net 25, every Saturday at 4 to 5 p.m., with replays on Sunday at 9 p.m.