(Eagle News)  — The director of the Philippine General Hospital (PGH), Dr. Gerardo “Gap” Legaspi becomes the first person to be given the Sinovac vaccine in the country, as the Philippines begins is vaccination roll-out to defeat COVID-19.

Legaspi said that he is also very thankful that vaccines had already arrived in the country.  He said even his family members will get the Sinovac shots since they have a history of allergies, and since Sinovac has been proven safe even for people with allergies.

Aside from Legaspi, Food and Drug Administration (FDA) Director General Eric Domingo also got the Chinese-made Sinovac shot to convince health workers and the rest of the country’s frontliners to get the shot. Even infectious disease specialist, Dr. Edsel Salvana, also got the shot believing in Sinovac’s safety and efficacy. 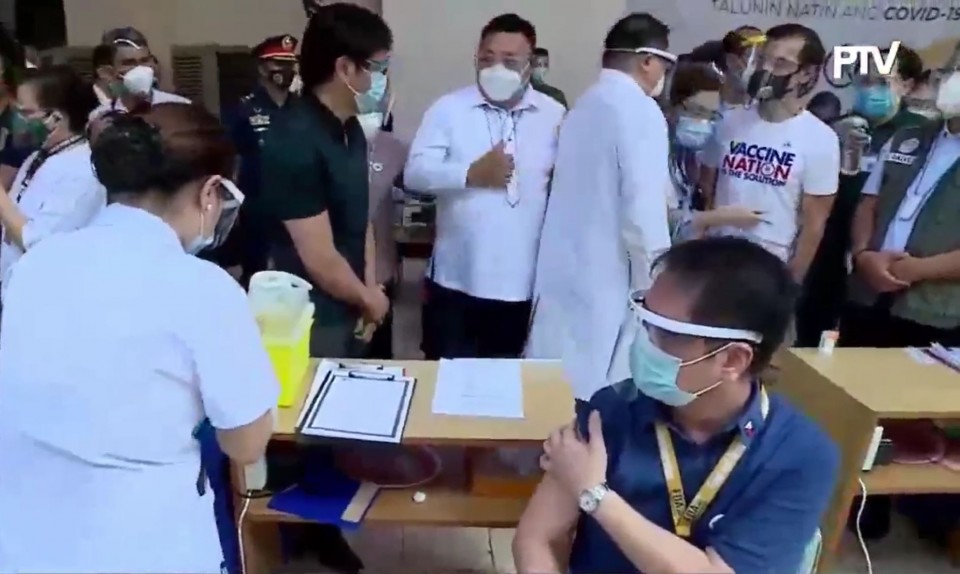 Food and Drug Administration (FDA) chief Usec Eric Domingo also gets Sinovac vaccine shot to convince health workers and other frontliners that the Chinese-made jab is safe and effective. This was done at the PGH on Monday, March 1, 2021. (Screenshot pof PTV-4/RTVM video)FDA director Domingo had earlier said that Sinovac is safe and effective even for people with allergies, unlike other vaccines such as Pfizer-BioNTech where there had been reports of severe advverse reactions

Testing czar Vince Dizon is also the first member of the Philippine government’s Inter-Agency Task Force to get the SInovac shot.

The vaccine roll-out was also done at the Philippine National Police (PNP) headquarters in Camp Crame, Quezon City.  Both the military and the police are included in the priority list to get vaccines against COVID-19.

The IATF had earlier approved the recommendation of the National Immunization Technical Advisory Group (NITAG) to give the SInovac vaccines for health care workers, after the clarification done by the FDA that this vaccine can also be given to the country’s medical frontliners.

“This can save your lives, guaranteed 100 percent,” Dr. Salvana said.