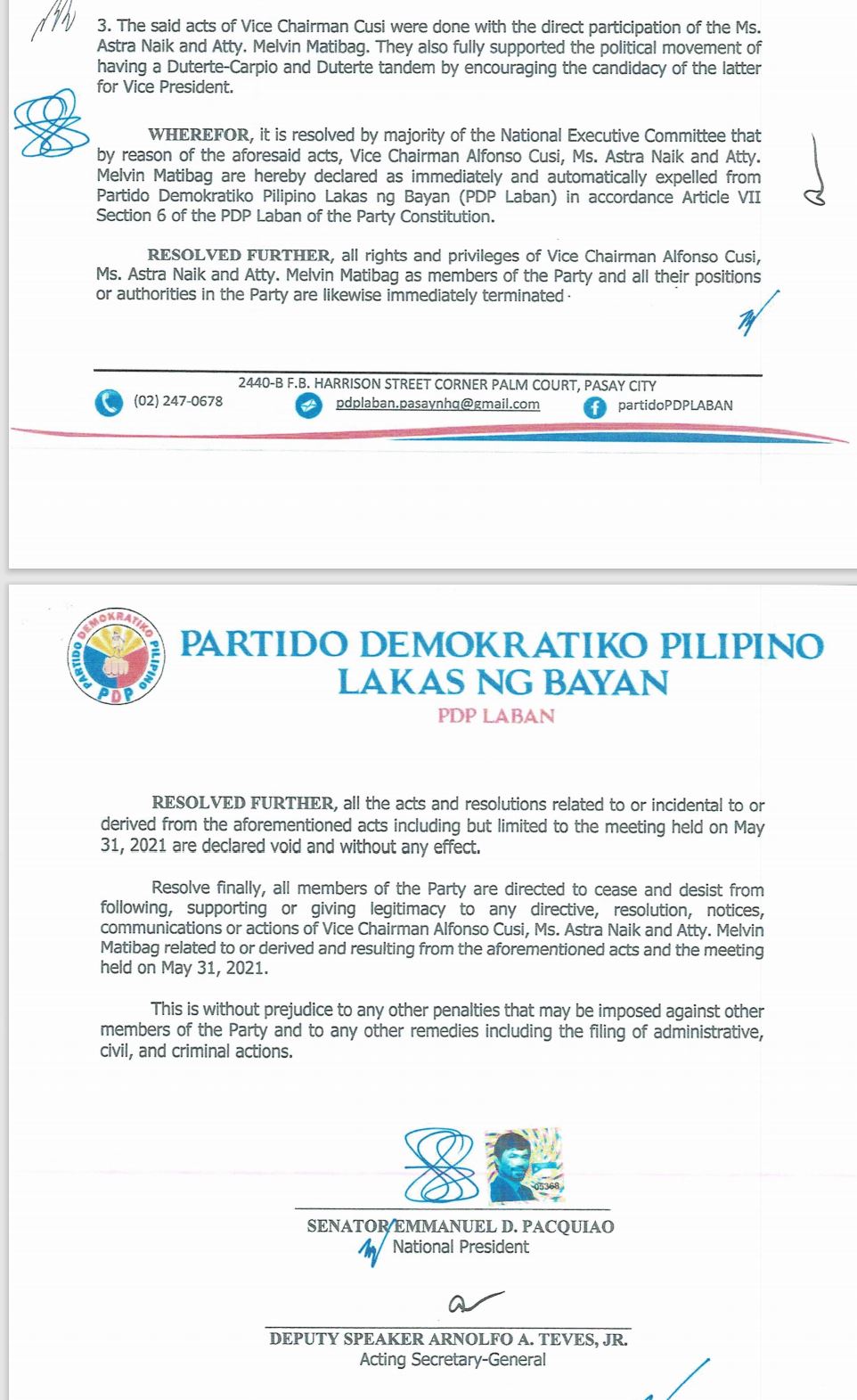 The resolution signed by Pacquiao was dated June 12, 2021 and adopted on July 3. It was released by PDP-Laban executive director Ron Munsayac to the media on Friday, July 9, two days after the public airing on televison of a meeting by President Rodrigo Duterte with PDP-Laban Vice-Chair Cusi and other PDP Laban executives where Duterte said he was sold to the idea of running for vice-president in the May 2022 elections.

In PDP Laban resolution no. 6 series of 2021 signed by Pacquiao and five other PDP-Laban officials, it expelled Energy Secretary Cusi as PDP-Laban vice-chairman, and party Deputy Secretary General Melvin Matibag and Membership head Astra Naik. It also “immediately terminated” all their “rights and privileges” as party members.

The resolution issued by Pacquiao-led PDP Laban group claimed to have the backing of some 10,000 PDP Laban members from the grassroots.

It claimed that Cusi, Matibag and Naik violated Article 7 section 6 of the PDP-Laban Constitution.

“Vice Chairman Cusi is already manipulating the party to support the Duterte-Duterte tandem which is a blatant admission of supporting Sara Duterte Carpio for President, who is not a member of the Party. He is guilty of having allegiance to a candidate and her political ideals and party,” the said PDP-Laban resolution said.

“Such a candidate does not even believe in Federalism, her party fielded candidates against and opposed official candidates of PDP-Laban in 2019 Elections, and she is vehemently opposed to joining the PDP-Laban Party,“ it added.

Another resolution signed by Pacquiao and the same five of the members of the NEC invalidated the May 31, 2021 national council meeting led by Cusi that had called on President Rodrigo Duterte to run for vice-president in next year’s national elections.

The resolution claimed that Cusi as vice-chair “usurped” the authority of the party chair who is President Duterte.

On May 30, however, Presidential Spokesperson Harry Roque said that Cusi was authorized by President Duterte to call the national council meeting on May 31 in Cebu City.

The Pacquiao signed PDP-Laban resolution also declared as void the call for a national assembly meeting of the PDP Laban on July 17.

“The alleged meeting of National Assembly scheduled on July 17, 2021 called by Vice-Chairman Cusi, Ms. Naik, Atty. Matibag, including all notices of the said meeting are likewise unauthorized and void for being in violation of the PDP Laban Constitution,” the resolution signed by Pacquiao and five others stated.

The said PDP-Laban resolution no. 5, series of 2021, also authorized Pacquiao as national president of PDP Laban to “exercise his power to direct, supervise, investigate and discipline the members of the Party involved in violating of (sic) the PDP Laban Constitution by implementing and executing the provisions thereof including the penalizing members (sic) with immediate and automatic expulsion as may be warranted by the circumstances.”

Another PDP resolution (Resolution No. 4, series of 2021) dated June 12, 2021 signed by Pacquiao and four others granted the “Party President full power and authority to do and perform all and every act and thing whatsoever requisite and necessary to be done in and about the premises in order to achieve the purpose and objective of this Resolution.”

The resolution resolved that the party’s officers and members should “comply with the Party Constitution and the orders and directives of the National Executive Committee.”

The resolution said the party’s National Executive Committee resolved “that Senator Emmanuel “Manny” Pacquiao, the National Party President” be granted the power and authority “to direct, organize, create and appoint investigation committees from the National Committees to conduct investigations of the complaints and information regarding certain officers and members of the Party who may have violated the Party Constitution or may have committed acts inimical to the Party by showing allegiance to another Party.”

This resolution was adopted on June 25, and preceded the two other resolutions that invalidated the PDP-Laban National Council meeting called by Cusi (Resolution No. 5), and that which expelled Cusi, Naik and Matibag (Resolution No. 6).

In all these resolutions, the signatories were Pacquiao as Party President, Teves as Acting Secretary General, Rebadulla as party national treasurer, Munsayac as party executive director, Arcega as chair of the Education Committee, and Atty. Oxales as chair of the party’s legal affairs and arbitration.

The resolutions further exposed the widening rift within the PDP-Laban ruling party chaired by President Duterte.

These were issued to the media by Munsayac after the July 6 meeting of President Duterte with PDP-Laban executives led by vice-chair Cusi and other government officials, where Duterte declaredthat he was “sold to the idea” of running for vice-president as proposed by the National Council meeting called by Cusi.

In that meeting with PDP Laban executives aired on July 7, the President also hit Pacquiao, and hinted that he would be looking into a tax evasion case where the senator was alleged to have been assessed to pay P2.2 billion.

“I’ll try to find out. May ano yan, may utang siya P2.2 billion. Not because gusto ko siyang habulin, ayaw ko, but sabi kasi nya corrupt. Eh, di kung corrupt kami, di ikaw when you cheat government, you are a corrupt official lalo na. So I remember na mayroon, may kaso siya. It’s still … I think with the courts. I do not know, but I’ll check it,” Duterte said then.