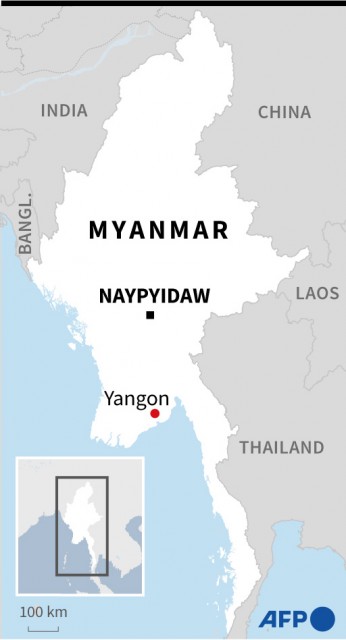 A bomb blast killed one person and injured nine others in a busy district of central Yangon on Tuesday, a Myanmar police source told AFP.

The blast occurred around 3:20 pm local time (0850 GMT) near a bus stop,” the police source said, requesting anonymity. “One man died in hospital and nine others are injured.”

A bomb squad team was working to determine if the blast came from a grenade or mine, the police source said.

Pictures published by local media showed several bodies lying on the ground in the bustling Downtown district and what appeared to be blood on the pavement.

Security forces later found an unexploded grenade near the site of the blast, the police source said.

A local volunteer paramedic who arrived on the scene shortly after the explosion said his team had taken two seriously injured people to hospital.

No group has claimed responsibility.

The Southeast Asian country has been in turmoil since the military coup that ousted Aung San Suu Kyi’s civilian government, with fighting flaring in ethnic rebel border areas and the economy in chaos.

Self-declared civilian “people’s defence forces” have also sprung up to fight the junta and dissidents have targeted officials or organisations perceived to be working with the military.

Across the country, there are almost daily killings of low-level junta officials or alleged informers, with details murky and reprisals from the military often following quickly.

Most of the violence has occurred in rural areas, although anti-coup fighters have also targeted officials and infrastructure in towns and cities.

Last November, a top executive from Mytel — a telecom venture between Myanmar’s military and Viettel, itself operated by Vietnam’s army — was gunned down outside his Yangon home.

And in August, anti-coup fighters shot dead five policemen on a commuter train in Yangon.

A shadow government dominated by lawmakers from Suu Kyi’s ousted party and which is working to overturn the coup said it condemned the blast on Tuesday.

“We strongly condemn this terrorist act targeting civilians,” its Defence Ministry said in a statement.

More than 1,800 people have been killed and more than 13,000 arrested in the junta’s crackdown on dissent since the coup, according to a local monitoring group.