By Caesar Vallejos, Open for Business

NET25, the first digital broadcast television station in the Philippines, recently launched a dozen new TV programs and projects and unveiled a new logo representing the commitment of its mother network, Eagle Broadcasting Corporation (EBC) – to soar high above the challenges of the global pandemic.

The brand refresh of NET25 features the world’s largest eagle in terms of length and wing surface – the Philippine Eagle – “a natural treasure found only in the Philippines” and is the country’s national bird.  The mighty raptor, considered the flagship species in the conservation of Philippine wildlife, is sometimes called the “king of the birds” and “lord of the skies.”

The new gold color of the NET25 typeface represents EBC’s more than five decades of service in providing news, information, and entertainment aligned with its vision to bring the truth to its global audiences.

As a Filipino symbol of national pride, the NET25 management believes that the Philippine Eagle’s strength, uniqueness, power, and bravery exemplify the network’s approach in facing the global pandemic.  That is to inspire people with boldness in delivering relevant programs to families and the youth in these interesting times.

Despite the global pandemic, NET25, through its mother company EBC launched the following TV shows and projects: 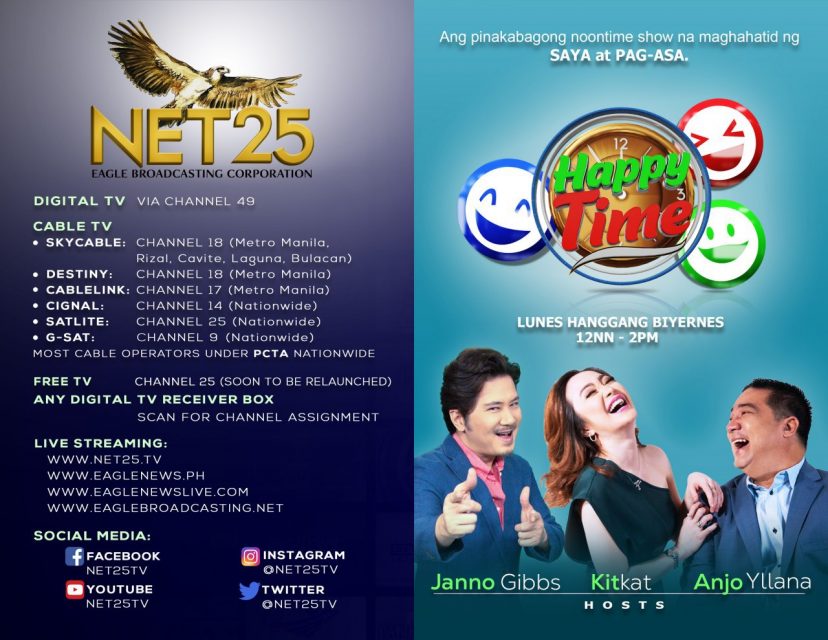 More than just a noontime show full of games, it gives hope to viewers amid these tough times where almost everyone has been affected by the pandemic.  The show reaches out to people and tries to help them, and not just provide fun and laughter. Happy Time” has segments that help Filipinos cope with the crisis. It promises viewers joy and hope, with its “saya at pag-asa” tag for a “Happy Time.”

UNLAD: Kaagapay Sa Hanapbuhay
Hosted by Robin Padilla, UNLAD: Kaagapay sa Hanapbuhay is NET25’s show that tackles agriculture, livelihood, and entrepreneurship.  It is aired every Sunday from 7:30 PM to 8:00 PM with replays on Saturday at 9:00 AM. 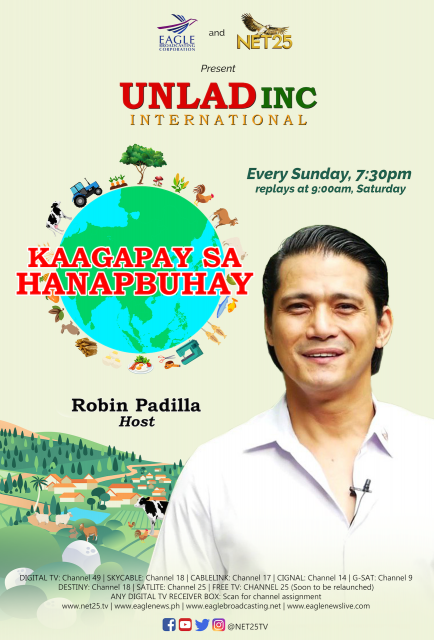 UNLAD is an informative and inspiring TV program that helps generate employment in response to the problem of unemployment and worsening poverty not only in the Philippines but also across the globe. This project is under the auspices of UNLAD International Inc. It also showcases stories of hope and success of people whose lives have been changed through this initiative’s help.

Kesayasaya!, a musical sitcom that pays tribute to Overseas Filipino Workers (OFWs) is aired every Sunday at 6:30 PM with replays every Saturday at 9:30 AM.

It is the story of the OFWs and the Filipino families who are intricately connected to them, as they try to survive the various challenges brought about by the COVID-19 pandemic.  The sitcom tackles the typical day-to-day problems of OFWs such as homesickness, long-distance relationships, loneliness, children alienated from their OFW parents, reintegration of OFWs, and financial mismanagement, among others. It also showcases the blended race that the Filipinos learned to embrace – a unique mashup of the Filipino culture and how we, as a people survive life’s difficulties anywhere we are.

Tagisan Ng Galing (TNG) is the largest nationwide talent competition of NET25.  It is aired every Saturday and Sunday from 12NN to 1 PM, with replays at 9 PM. What used to be a competition of different acts is now split into singing and dancing categories. 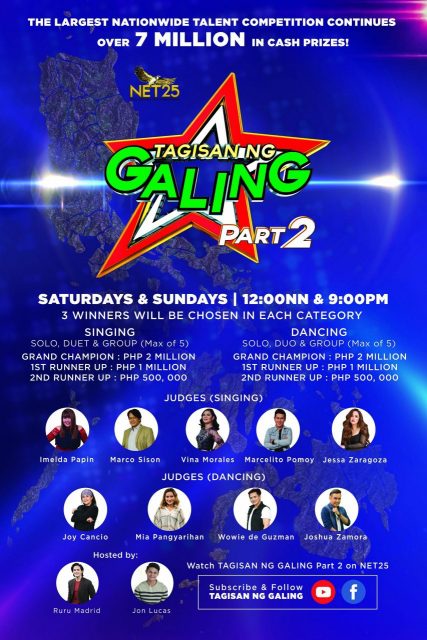 The talent competition offers bigger prizes, more rewards, and brighter celebrities performing on the TNG stage.  Over P7 Million in cash prizes await winners in both categories.  The show has weekly, monthly and quarterly finals before the main event in both singing and dance editions.

Himig Ng Lahi, hosted by Pilita Corrales and Darius Razon, is a musical show that aims to promote OPM and gives tribute to great Filipino composers and showcases the best singers in the country.

It is a program that acquaints today’s millennials with the past, a show for the generation that saw the best of Filipino music from the 60s to the 90s. It is aired every Sunday from 11 AM to 12NN and replays at 8 PM.

Another musical program aired from Monday to Friday, from 8 PM-9 PM, is Letters and Music, hosted by Apple Chiu, Nikki Facal, and RM Dizon. It is an award-winning musical show that promotes Filipino music and talents, from the best singers in the airwaves to rising singers in the industry.

The one-hour live TV program that showcases letters from viewers and listeners come with engaging segments highlighted by a combination of taped and live music performances for a relaxing night viewing.

Mata Ng Agila is the evening primetime news program of NET25 aired Monday to Friday 6 PM-8:00 PM. It is the primary program of Eagle News Service with broadcast veteran Vic de Leon Lima as the latest addition to its newscast personalities. It is co-anchored by Ely Saludar and Judith Llamera.

EBC Music was a spin-off of the online concert dubbed #EnjoymusicBeyondtheCrisis, specially created for the benefit of the FYM Medical Foundation.  Proceeds of the online show were intended for the purchase of PPEs and COVID-19 relief for health workers, front liners, and affected communities. After the lockdowns, the online concert continued to be a regular TV program produced in cooperation with E25 Records, the record label of EBC. 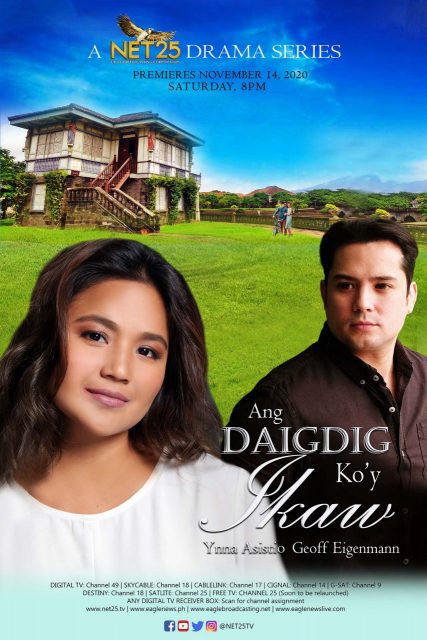 Ang Daigdig Ko’y Ikaw is NET25’s first romantic drama series with the story of three old friends who find themselves and their families trapped in their old, small-town during the nationwide lockdown where old feelings resurface amidst unresolved issues.

Beyond information and entertainment, Relax Ka Lang is a NET25 morning show designed to inspire, influence, educate, and empower its audiences.

The show will spread good vibes with topics that inspire viewers to have hope in life, share stories that influence viewers to imbibe moral values and run episodes that empower viewers to make a positive change.

It will be hosted by real-life friends Ara Mina, Jan Marini, and Melissa Ricks. Its schedule will be Monday to Friday, 11 AM-12NN, a pre-programming for Happy Time. 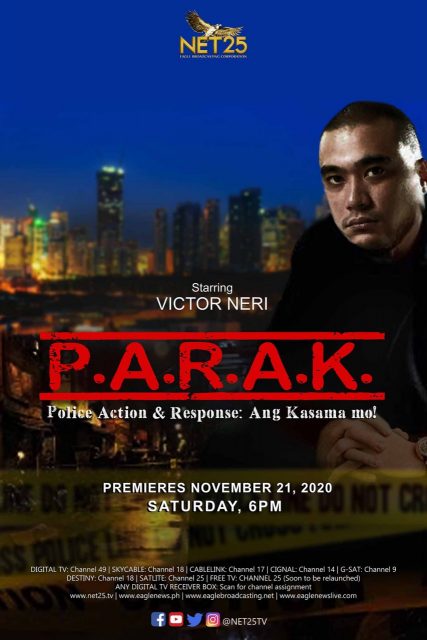 From stories of heroism to emergencies and outreach programs, PARAK is a docudrama television program that presents a deeper understanding of law enforcement and examines how police departments protect the public and reach out in the most surprising ways.

PARAK is also the acronym for Police Action and Response: Ang Kasama mo!

It will be top-billed by Victor Neri, Ara Mina, Antonio Aquitania, AJ Muhlach, Mico Aytona, Jethro Ramirez, Teresa Loyzaga, and many others.  It will be aired every Saturday at 6 PM, with replays every Sunday, 11 PM starting November 21.

Despite the massive impact of the pandemic in the movie industry, EBC is also shooting its latest movie production through its film arm, EBC Films.

Directed by the award-winning Carlo Cuevas, who wrote the successful Guerrero 1 and 2, which won accolades for EBC Films from local and international award-giving bodies, The Juke Box King is the life story of Victor Wood, one of the Philippines music legends.

After a rigorous search, Martin Escudero will play the title role in the movie.  The Juke Box King is expected to excite movie audiences as it will bring them into a time warp of the great music of the 70s with the heartaches and life lessons of the man who ruled the airwaves in his time.

EBC was the pioneering media company to test the ISDB-T system in the Philippines, which launched NET25 as the first all-digital TV station broadcast in full HD.