By Caesar Vallejos, OPEN FOR BUSINESS

EAT’S SINGING TIME of NET25 is the newest game show on Philippine television. 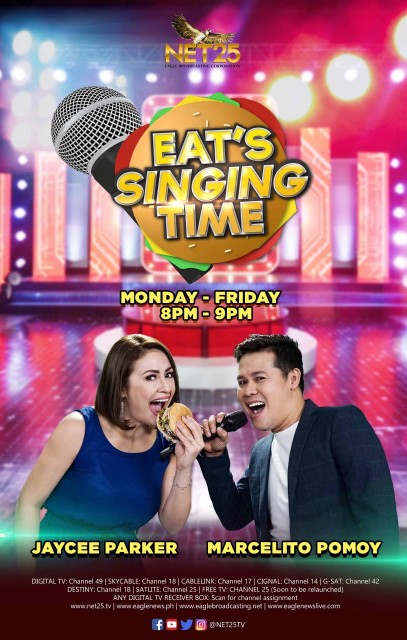 Starting January 4, 2020, EAT’S SINGING TIME will be aired Monday to Friday, 8 PM-9 PM, hosted by world-class artist Marcelito Pomoy and the fierce, funny foodie, Jaycee Parker.  They will be joined by the hilarious Boobsie Wonderland.

NET25’s latest entertainment offering is inspired by the Filipinos’ pastime favorite, videoke.  However, the show sings a different tune as this is not an ordinary videoke session or singing competition.

EAT’S SINGING TIME is a melodious blend of two challenges – singing and eating  – performing together in perfect harmony.

This kantahan and kainan rolled into one, will showcase power belters, brilliant balladeers, aspiring artists, and karaoke enthusiasts singing their hearts out while doing challenging tasks to achieve that so-called perfect pitch!

Round 2 – Sing Gulo-Gulo – will have the contestants sing tunes while undergoing challenges.  The final round – BIGating EATing – serves oversized food to the contestants who must finish eating at a specific period.  Points are given to a contestant in each round and the overall winner in the three rounds will be declared the winner.

EAT’S SINGING TIME will be aired right after NET25’s major newscast Mata Ng Agila.  Viewers on-air and online can expect another high-quality entertainment as the people behind the Philippine newest game show are also the makers of Happy Time and Kesayasaya!