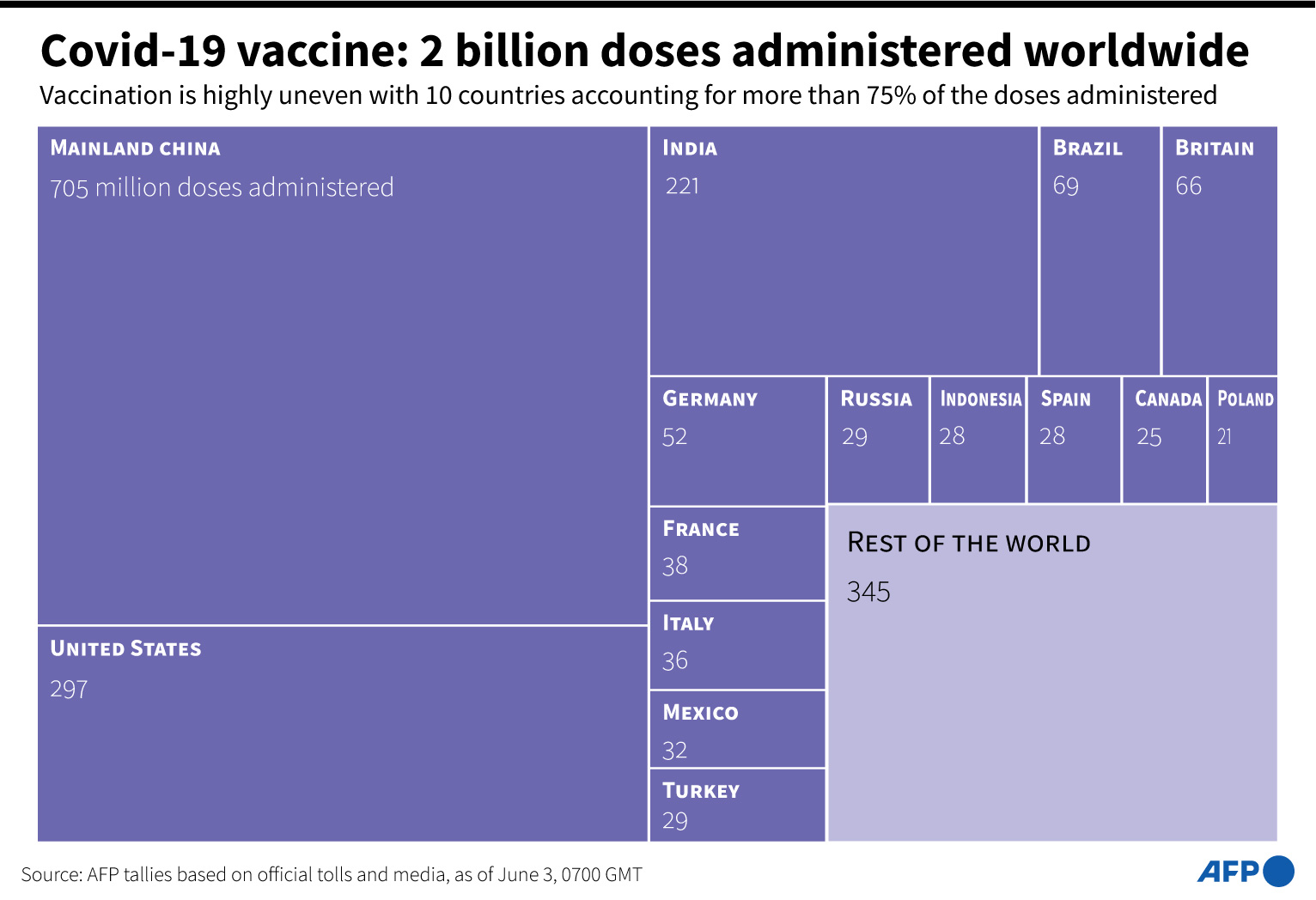 PARIS, France (AFP) — More than two billion Covid-19 vaccines have been given across the world, according to an AFP tally Thursday drawn from official sources.

The milestone comes six months after the first vaccination campaigns against Covid-19 began.

Israel, which has led the race from the start, is still out in front, with nearly six in 10 people there fully vaccinated.

It is followed by Canada (59 percent of the population have had at least one jab), the United Kingdom (58.3 percent), Chile (56.6 percent) and the United States (51 percent).

Nearly four out of 10 people in the European Union have had at least one shot, with Germany leading with 43.6 percent, followed by Italy (40 percent) and France and Spain on 39.4 percent.

Only six countries in the world have not yet started vaccinating — North Korea, Haiti, Tanzania, Chad, Burundi an Eritrea.

But with vaccination programmes now accelerating globally, China leads the league of countries giving doses the fastest over the last week, injecting 1.37 percent of its population per day.

Bahrain and Uruguay are also covering about one percent a day.

Germany is not far off that as the leader of the EU bunch followed by Italy (0.81 percent) and Spain (0.71 percent).

Despite being ravaged by the pandemic, the speed of vaccination in India and Brazil has been much slower, covering only 0.19 of the population in India’s case and 0.29 of Brazil’s.

In fact there is still huge inequality in the spread of vaccines, with only 2.5 doses per 100 people in Africa against 87 per 100 in the US and Canada and 47 in Europe.

The world’s poorest countries have given only 0.3 percent of the jabs while the richest got four out of 10 shots even though they have only 16 percent of the global population.

Oxford/AstraZeneca is the most widely given vaccine, administered in 170 of the 215 countries where campaigns have begun.

The Oxford/AstraZeneca shot is also the mainstay of the Covax vaccine sharing programme for poorer countries, while the Pfizer/BioNTech and Moderna jabs — which are more difficult to store — are the preserve of wealthier countries.

Like Russia’s Sputnik V, the Chinese vaccines developed by Sinopharm and Sinovac have been used most by emerging or developing nations.