Aquino family says PNoy “died peacefully in his sleep”; thanks friends who stood by him, voters who trusted him

(Eagle News) – The family of former President Benigno Simeon “Noynoy” Aquino III thanked all those who loved and trusted the late president, and spoke of how he had served the nation from the heart, without noise and fanfare.

Noynoy’s sister, Aurora Corazon “Pinky” Aquino-Abelleda, read a statement to the media on Thursday, June 24, confirming her brother’s death, and spoke of their family’s grief in his passing away, saying the reality of his death has yet to sink in.

She also talked of the family’s grief that their brother, a very private person, had endured also in silence all the criticisms hurled against him.

-“No words can express how broken our hearts are”-

Pinky was with the rest of the Aquino sisters — Maria Elena (Ballsy), Victoria Elisa (Viel), and Kristina Bernadette (Kris) – when she read their family’s statement confirming their brother’s death.

“It is with profound grief that on behalf of our family, I am confirming that our brother, Benigno “Noynoy” S. Aquino III died peacefully in his sleep. His death certificate pronounced his death at 6:30 AM due to RENAL DISEASE secondary to DIABETES. No words can express how broken our hearts are and how long it will take for us to accept the REALITY that he is gone,” their statement said.

“MISSION ACCOMPLISHED Noy, be happy now with Dad and Mom. We love you and we are so blessed to have had the privilege to have had you as our brother. We’ll miss you forever,” Pinky said.

Aquino’s sister spoke of how their brother served the Filipino nation with dignity, and that even when people were hurling accusations against him, and the family was urging him to speak out to defend himself, Noynoy decided to keep silent, saying there was no need to speak out as he can still sleep peacefully at night.

The Aquino family’s statement also recalled how Noynoy faced the various investigations and hearings conducted at the Sandiganbayan in November 2017, at the Senate in December 2017, and before the House of Representatives in February 2018.

“Because when you enter public service, when you serve with honesty and dignity, and you know you have committed no crimes against the people, HINDI KA MATATAKOT MAGSABI NG TOTOO,” Pinky said reading the family’s statement.

The former President personally went to the Sandiganbayan to post bail in November 2017 after the anti-graft court’s Third Division found probable cause to hold trial on the Office of the Ombudsman’s charges of graft and usurpation in connection to the Mamasapano case.

He also attended a Senate hearing in December 2017, and a Congressional inquiry on the Dengvaxia controversy.

Pinky Aquino stressed how their brother was a very private person. She thanked all the doctors, nurses, medical staff who took care of Noynoy when he was hospitalized, saying they had become “compassionate friends who gave him true respect by valuing and protecting his privacy.” 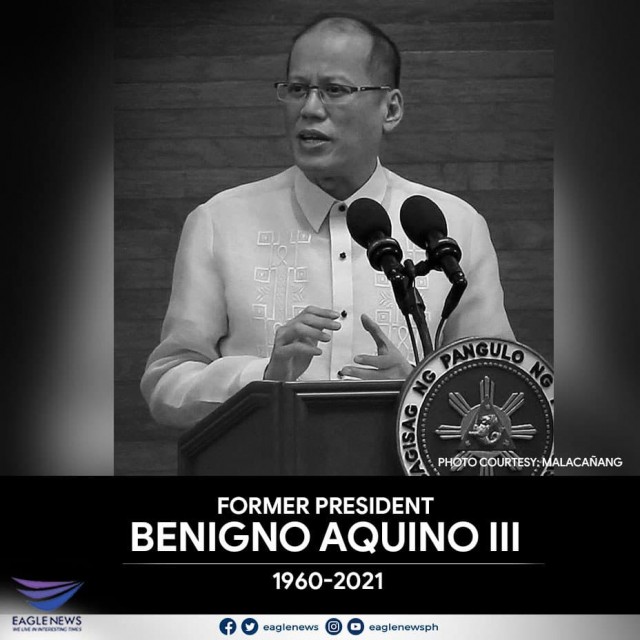 Pinky also thanked Noynoy’s true friends who did not fail to visit or text him, sending food, accompanying and protecting him during the difficult times. She also thanked all those who had prayed for their brother.

She also mentioned the people who stayed with him at Times Street during the pandemic, who did not leave him or go out much, knowing how delicate his situation was amid the raging pandemic.