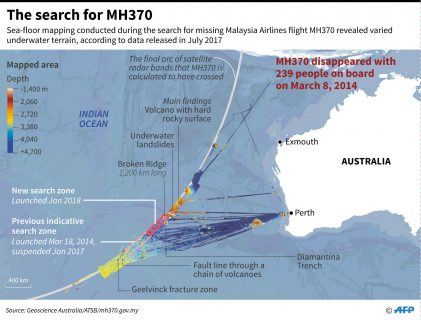 KUALA LUMPUR, Malaysia (AFP) — The search for flight MH370 will end next week, Malaysia’s transport minister said Wednesday, more than four years after the plane disappeared and triggered one of the world’s greatest aviation mysteries.

The Malaysia Airlines jet vanished in March 2014 with 239 people — mostly from China — on board, en route from Kuala Lumpur to Beijing.

No sign of the jet was found in a 120,000 square kilometer (46,000 square miles) sea search zone and the Australian-led hunt, the largest in aviation history, was suspended in January last year.

After pressure from family members, the former Malaysian government struck a deal with US exploration firm Ocean Infinity to restart the search in January on the condition it would only be paid if the Boeing 777 or its black boxes were found.

The firm stood to make up to $70 million if successful but did not find any sign of the jet despite scouring the seabed with some of the world’s most hi-tech search equipment.

Malaysia’s Transport Minister Anthony Loke, part of the new government that came to power following May 9 elections, said the hunt was officially meant to finish in April but had been extended, and would come an end next week.

“The search will continue until May 29,” he told reporters.

Prime Minister Mahathir Mohamad had said earlier that the contract with Ocean Infinity was being reviewed, as his administration seeks to cut costs after accusing the allegedly corrupt former regime of leaving the public finances in bad shape.

Grace Nathan, a Malaysian lawyer whose mother Anne Daisy was on the plane, said the news was not a surprise but said the government should leave the “no find, no fee” offer on the table in case a company wants to take on the search in future.

“We can’t tell (the government) what to do but for me and the families… finding the plane is important for many reasons,” she told AFP.

In a letter to the new administration released before the end of the search was announced, Voice370 — a group representing families of those on the plane whose members include Nathan — urged the government to undertake a “comprehensive review” of all matters related to the plane’s disappearance.

It also called for “an investigation into any possible falsification and/or elimination of records related to MH370”.

The new hunt was in an area of about 25,000 square kilometers in the southern Indian Ocean, north of the former search area.

The ship conducting the hunt, Seabed Constructor, was a Norwegian research vessel carrying 65 crew, including two members of the Malaysian navy as the government’s representatives.

It used eight autonomous drones, equipped with sonars and cameras, that scoured the waters for wreckage and can operate in depths up to 6,000 meters (20,000 feet).

Only three confirmed fragments of MH370 have been found, all of them on western Indian Ocean shores, including a two-meter wing part known as a flaperon.

The jet’s disappearance stands as one of the most enduring aviation mysteries of all time and has spawned a host of theories, with some blaming a hijacking or even a terror plot.

Mahathir himself revived one of the many conspiracy theories in March when he suggested the plane could have been taken over remotely to foil a hijacking.

Earlier this week, Australian investigators defended their findings that the plane was out of control when it plunged into the ocean, after a theory that a rogue pilot deliberately ditched the jet was revived in a book by a Canadian air crash investigator.