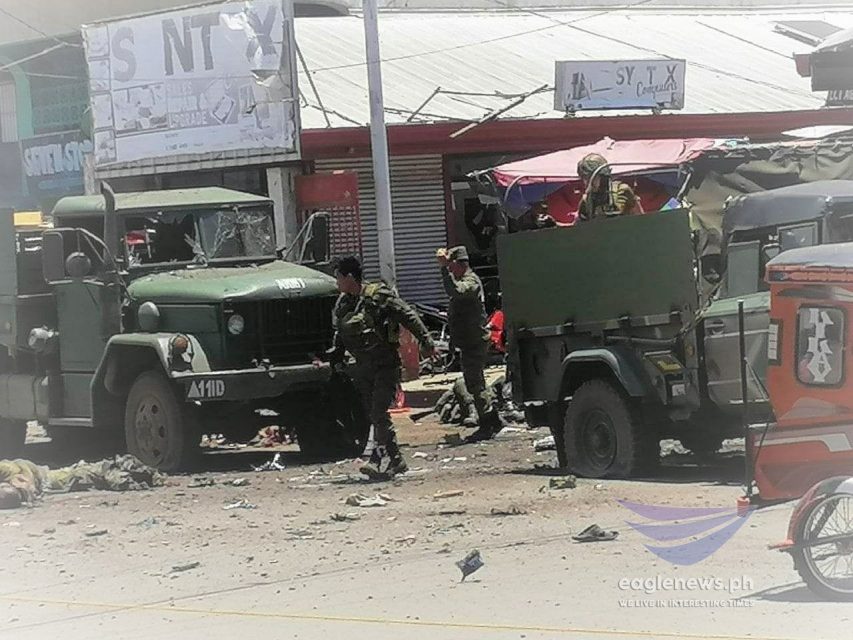 (Eagle News) — Philippine authorities locked down a part of Jolo in Sulu province following two deadly blasts by terrorist groups believed to be part of the Abu Sayyaf that killed at least 14 people, including seven soldiers, and wounded scores of civilians on a busy commercial street.

One of the casualties was a female suicide bomber who detonated herself after she was prevented by a soldier from getting close to people near the first blast site.

The first blast occurred shortly before 12 noon along a busy street near a local grocery store, Paradise Food, where a military truck was parked nearby. The cause of the blast was an improvised explosive device in a motorcycle that was detonated after parking near the truck where soldiers were on patrol to secure the busy area,

The second blast, involving the female suicide bomber, occurred about an hour later, around 1 p.m., in the vicinity of the first blast in Bgy. Walled City.

“Metro Jolo was locked down to prevent further casualties and preempt any other untoward incident,” said a statement from the Armed Forces of the Philippines Western Mindanao Command on Monday, August 24.

“The Joint Task Force Sulu assures the public that they will continue to sustain the security efforts for peace and stability in the province,” it said.

Both the Philippine police and defense officials suspected that this was connected to the terrorist Abu Sayyaf Group.

“The Joint Task Force Sulu, AFP together with the PNP (Philippine National Police) and Local Government Unit of Sulu, condemn in strongest term the terroristic act perpetrated by the terorr group Abu Sayyaf,” a statement posted by the AFP’s 11th Infantry Division said.

“For the security of the public, the Joint Task Force Sulu is implementing more stringent security measures to prevent further atrocities. We urge the public to remain calm and be vigilant for suspicious individuals,” it said.

Malacanang condemned the attacks which occurred as humanitarian efforts related to COVID-19 were being done.

President Rodrigo Duterte’s spokesman Harry Roque condemned the “dastardly attacks” and issued condolences to the families and loved ones of those killed.

“We call on the residents of Jolo to stay vigilant and report suspicious personalities and unattended items in their areas,” Roque said.

“As per initial investigation, the first explosion emanated from a vehicle-borne Improvised Explosive Device whereby two of our military vehicles parked in the area were partially damaged,” Vinluan said.

“We call on the peace-loving people of Jolo to be more vigilant and to offer prayers for the victims of the two explosions,” he added.

The first explosion happened at 11:53 a.m while the second one was at around 1 p.m.

Later, the number of dead rose to 14, including six civilians, according to a report by Lt. Col Ronald Mateo, civil military operations officer of the 11th Infantry Division.

Those injured in the blasts were 48 civilians, 19 soldiers, and 9 police personnel, a report by the Armed Forces of the Philippines Western Mindanao Command (WESMINCOM) said as of 5:29 p.m., Monday, Aug. 24.

The blasts happened in the vicinity of Paradise Food and Syntax computer shop in Barangay Walled City, Jolo, Sulu.

Police and more soldiers immediately responded to the scene to evacuate the casualties and ensure the safety of other residents.

“The Joint Task Force Sulu extricated the wounded individuals to Camp General Teodulfo Bautista Hospital for immediate treatment. Furthermore, the area was cordoned and the whole Metro Jolo was locked down to prevent further casualties,” according to a Facebook post by the 11th Infantry Division.

The apparently coordinated attacks happened in Jolo in Muslim-majority Sulu, where government-backed security forces have long been fighting the Abu Sayyaf group.

Initial reports said that among those killed were soldiers who were assisting in COVID-19 related humanitarian efforts.

The first blast happened after an improvised explosive device (IED) in a motorcyle parked near a military truck was detonated. This resulted in the death of six soldiers near the area.

-Female suicide bomber in 2nd blast-
The second blast happened after a female suicide bomber who was about to go near a crowd was thwarted by another soldier.  If not for the heroic efforts of this soldier, more persons would have been killed in the incident, Mateo said.

A soldier saw a person leave the motorbike outside the grocery store “where there were a lot of people” including members of the military. It immediately detonated, Mateo said.

“Our soldiers are conducting security operations. That was the time that the improvised explosive device detonated,” he said.

There was a second blast a short time later in the same street when a female suicide attacker blew herself up as police cordoned off the area, killing one person and wounding around six officers, Lieutenant General Corleto Vinluan said.

A solider had been trying to apprehend the bomber when she detonated her explosives, he added.

Abu Sayyaf was “most probably” behind the double bombing, Mateo said.

– Blasts follow arrest –
Listed by the United States as a terrorist organisation, Abu Sayyaf is a loose network of Islamic militants blamed for the Philippines’ worst terror attacks as well as kidnappings of foreign tourists and Christian missionaries.

They also have ties to Islamic State militants seeking to set up a caliphate in Southeast Asia.

Monday’s explosions come after the arrest earlier this month of an Abu Sayyaf leader on the southern island of Mindanao.

Security forces had been on alert for possible reprisal attacks after detaining Abduljihad Susukan, who is accused of kidnapping and beheading several foreigners.

He has been charged with 23 murders, five kidnappings and six attempted murders, police have said.

The Philippine Coast Guard issued a “red alert” for Sulu and several other areas in the restive south as it assists the military and police in responding to the incident.

The explosions happened near a Catholic cathedral in Jolo where two suicide bombers blew themselves up in January 2019 killing 21 people. It was blamed on a group linked to Abu Sayyaf.

(Eagle News Service with a report from Agence France-Presse)