He took the drug test amid allegations made by President Rodrigo Duterte that there was a presidential aspirant who was cocaine user.
Marcos Jr., however, clarified that he did not felt alluded to by the 76-year old Philippine president, the father of his running-mate Davao City mayor Sara Duterte-Carpio.

“I really don’t feel that I am the one being alluded to. In spite of that, I believe it is my inherent duty as an aspiring public official to assure my fellow Filipinos that I am against illegal drugs,” he said.

He said on Tuesday, Nov. 23, that he had submitted the results of his drug test to law enforcement agencies, particularly the Philippine Drug Enforcement Agency (PDEA), the Philippine National Police, and the National Bureau of Investigation.

He then said that he is a firm supporter of the war against drugs.

“Let me reiterate my assurance to my fellowmen, especially to the supporters of BBM-Sara Uniteam, that I am, and will remain, a vigilant anti-illegal drugs campaigner,” he said. 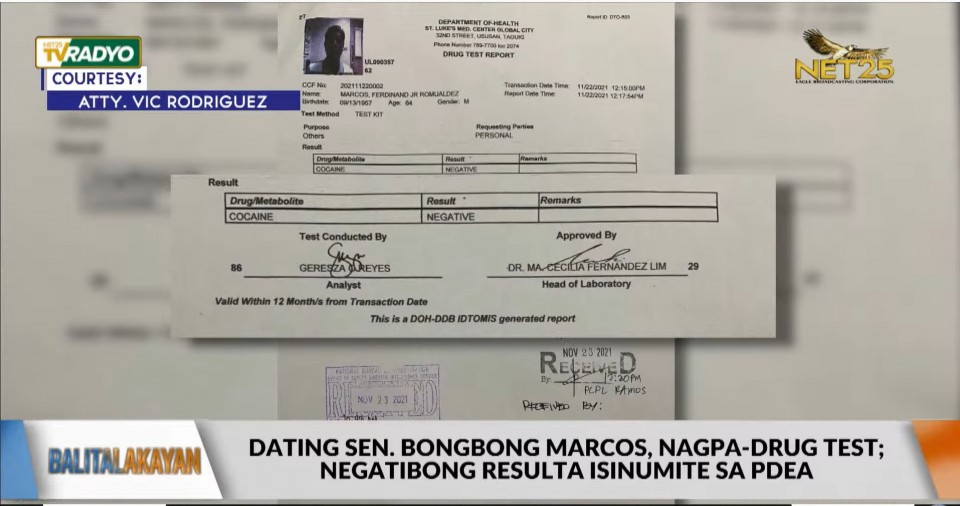 Marcos Jr. had his drug test at the St. Luke’s Medical Center in BGC, Taguig City.

Before this, presidential aspirant Senator Panfilo Lacson and his running-mate Senate President Vicente “Tito” Sotto III, also took a drug test to show that they were clean and did not take drugs at any point. The two took a multi-drug screening procedure at PDEA on Monday, Nov. 22.

Both also tested negative in their respective drug tests.

Another, presidential aspirant, Senator Manny Pacquiao said he had also tested negative in drug tests he took in the United States before his fight with Cuban boxer Yordenis Ugas in Las Vegas, Nevada.

“The test covers a wide range of performance enhancing drugs that include anabolic agents like steroids and all stimulants like cocaine and methamphetamine,” Pacquiao said in a press statement on Tuesday, Nov. 23.

Meanwhile, Senator Christopher “Bong” Go, the standard bearer of the Pederalismo ng Dugong Dakilang Samahan (PDDS), an allied party of PDP-Laban, said that he is willing to take a drug test anytime.

Vice-president Leni Robredo who is running as president said she supports surprise drug tests for candidates.

President Duterte, on Nov. 18 during a speech in Oriental Mindoro, first made a swipe at a presidential candidate who had used cocaine.

On Monday, Nov. 22, he repeated his swipe at this presidential candidate.