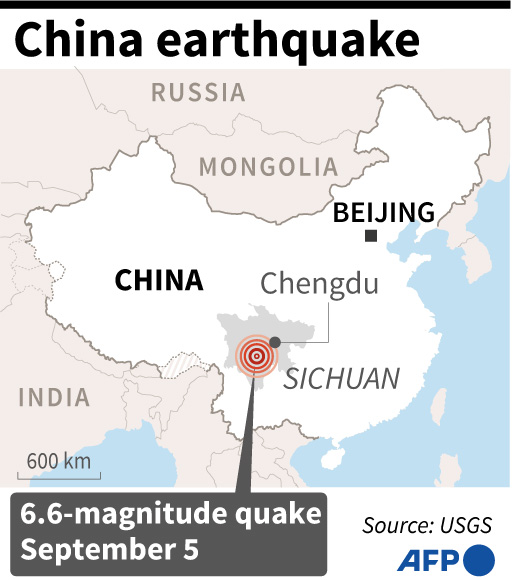 BEIJING, China (AFP) — A 6.6-magnitude earthquake struck southwestern China on Monday, according to the US Geological Survey.

The quake hit around 43 kilometers (26 miles) southeast of the city of Kangding in Sichuan province at a depth of 10 kilometers, the USGS said.

There were no immediate reports of any casualties.

Tremors were felt in the nearby megacity of Chengdu, a resident told AFP.

“I felt it quite strongly,” a woman surnamed Chen said. “Some of my neighbors on the ground floor said they felt it very clearly.”

Earthquakes are fairly common in China, especially in the country’s seismically active southwest.

On that occasion, a shallow 6.1-magnitude quake hit a sparsely populated area about 100 kilometers west of Chengdu, the provincial capital of Sichuan with a population of 21 million.

It was followed three minutes later by a second quake of magnitude 4.5 in a nearby county where the deaths and injuries occurred.

A magnitude 8.0 quake in 2008 in Sichuan’s Wenchuan county cost tens of thousands of lives and caused enormous damage.