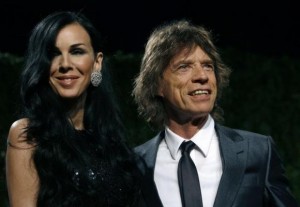 (Reuters) – Fashion designer L’Wren Scott, who committed suicide earlier this month, left her entire estate of $9 million to her long-time boyfriend, Rolling Stones lead singer Mick Jagger, according to a will filed in New York court.

Scott, 49, a favorite designer of Hollywood stars such as Nicole Kidman and Amy Adams, left jewelry, clothing, furniture, automobiles and property to Jagger, whom she had dated since 2001.

She omitted her two siblings in the will, that was signed on May 23, 2013 in Beverly Hills, California.

“I give the rest and residue of my estate to Michael Philip Jagger,” the will said. “Except for otherwise provided in this will, I have intentionally omitted to provide herein for any of my heirs at the date of my death.”

Court papers estimated the value of her personal estate at $9 million.

Scott was found dead in her New York apartment in Manhattan’s upscale Chelsea neighborhood on March 17. The medical examiner’s office ruled that the former fashion model and stylist had committed suicide by hanging.

At the time of her death, Scott’s company, LS Fashion Limited, was thought to be facing mounting debt. Company accounts filed in London reported a loss of 4.3 million euros ($5.99 million) in 2012, an increase from a 3.0 million euro loss the previous year.

But her New York representatives, PR Consulting, described the reports as “misleading and inaccurate,” and said Scott had been considering a restructuring of her global business.