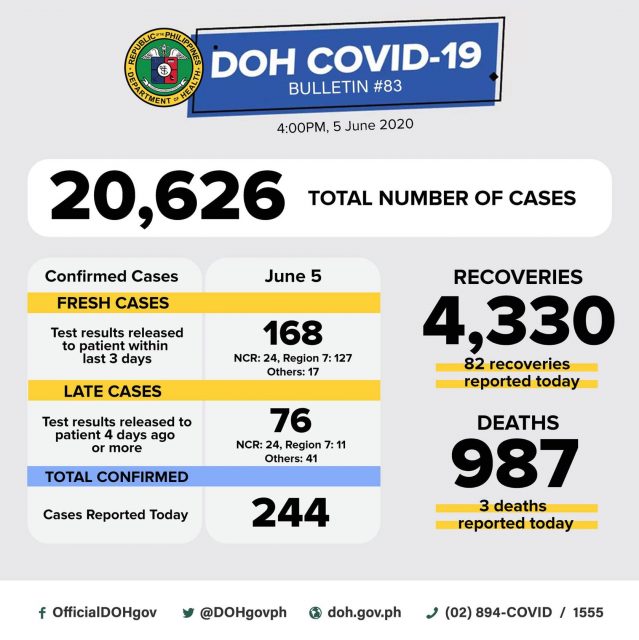 (Eagle News) — There were less COVID-19 cases reported on Friday, June 5, at 244 cases compared to cases in the last two weeks as the Department of Health said that its backlog of virus cases would soon be finished.

Only 76 of the 244 reported infection added were “late cases.” The rest, or 168, were fresh cases, mostly coming from Central Visayas at 127.

-Only fresh cases to be reported after DOH completes backlog validation-

Health Undersecretary Maria Rosario Vergeire said that the DOH is nearing completion of its backlog of COVID-19 cases, as only one laboratory has failed to submit its report of cases.

She said that in the next few days, the DOH is expected to complete the validation of the backlog of cases, and that only fresh cases would then be reported daily after the lone laboratory that has not yet submitted its report finishes its accomplishment and submits the required line list

There were also only three deaths reported, which is the same low number recorded in June 1. Like in June 1, the reported three deaths in a day is the lowest so far since March.

The DOH has earlier noted the continuing decline of deaths reported daily since start of April.  There was even marked decline in May, it said.  Because of this, the mortality or death rate in the country due to COVID-19 is also decreasing.