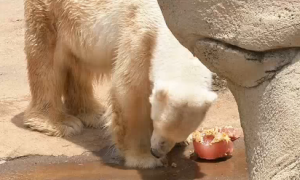 (Reuters) — Wang, the only polar bear in Africa, has taken the death of his life-long partner very hard, tearing up toys and grass in the enclosure they shared, and two weeks after his loss he is still grieving.

The 30-year-old Geebee was found dead on January 13 in the pool of her Johannesburg Zooenclosure after a heart attack. The two had been partners since they arrived at the South African zoo in 1985, each of them barely a year old.

“With the passing of Geebee, Wang is the last polar bear in the whole continent of Africa, and when he will die they will be no more polar bears in Africa,” the zoo’s chief vet Katja Koeppel told Reuters.

If not pacing about, Wang stood by Geebee’s body and barely ate his rations, she said. After 24 hours, Koeppel had to sedate Wang to retrieve Geebee’s remains.

For days afterwards, he was inconsolable, cutting up his toys and even bending the steel door of his pen, she added.

On Friday, Wang often nestled his head beneath his formidable front paws, as though trying to shut out the world. Occasionally he raised his head to sniff the air.

Geebee arrived nearly three decades ago from Canada, while Wang came from a zoo in Japan. Despite being life-long partners, they did not breed because females must be in temperatures below 20 degrees Celsius for a minimum of 30 days.

In the wild, polar bears live for about 18 years and tip the scales at 400kg (880 lbs). Wang is now 250kg after losing muscle mass due to extreme old age and liver failure.

Aged 30, is 30 the Johannesburg Zoo does not expect Wang to live much longer. He is an old man,” Koeppel said. When his time does come, it is likely to be the end of polar bears in Africa.”

“There is no conservation we can for the polar bear here, they don’t breed due to our climate, so our feeling is it wouldn’t be fair to bring polar bears to Africa into a wrong climate and will not have polar bears on exhibit any longer ,” she said.

“It is not appropriate to have polar bears in captivity in Africa.”