(Eagle News)– Senatorial candidate actor Robin Padilla maintained his lead as the top senatoriable who got the most number of votes in the May 9, 2022 elections.

As of the May 12 partial and unofficial count, or three days after the elections, his votes hit more than 26.4 million, while the candidate at rank 2 is senator Loren Legada who in the previous elections had always been the frontrunner in the senatorial race. Legarda got 23.9 million votes.

Padilla topped the race at his first run for the senate.

In an interview with NET25, Padilla said the fact that he is leading the race by a big margin over popular veteran senators has yet to sink in.

Padilla said he believes the the electorate wants change. 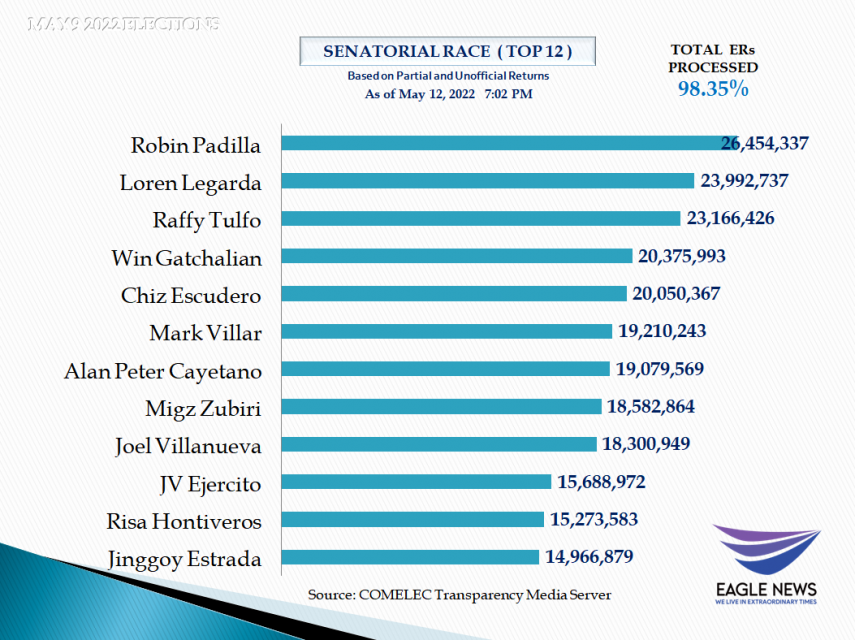 Padilla, who converted to Islam in the late 1990s, said that he is pushing for charter change, believing that the country’s political system – a unitary presidential system – needed to change.

The actor is not really a stranger to politics, coming from a political family. His father, Casimero “Roy” Padilla Sr., was a politician who had served as the vice-governor or Camarines Norte in the 1970s, and as assemblyman in the 1980s.

-A voice from the Muslim community at the Senate-

At this point of his life, Robin Padilla said, he wants to help and give voice to Muslims’ concerns at the Senate.

The last time that there had been a Muslim senator was 27 years ago when Santanina Rasul served at the senate from 1987 to 1995.

Padilla said that he sought the Iglesia Ni Cristo’s help so he could be that voice of the Muslims at the Senate.

He said that he told INC Executive Minister Brother Eduardo V. Manalo that he wants to help the Muslim community.

He said he was aware of how the INC had helped many people, including members of the Muslim community here and abroad, including in Africa.

Padilla expressed his sincere gratitude to the INC as he was one of the senatorial candidates whom the INC members had voted for.

He said he is sure that his big “pull-away” win was due to the solid vote of the INC members.