According to Bro. Joel V. San Pedro, INC minister, Matityau initiated the visit. The Israeli Ambassador was also warmly welcomed by the ministers and volunteer workers assigned in the INC Central Office. After the meeting with Bro. Eduardo Manalo which lasted for about 45 minutes, Matityau proceeded to visit the New Era University and the INC School for Ministers.

San Pedro said that the visit of Ambassador Matityau strengthens the relations of the INC with the state of Israel. Last March 31,2016, Bro. Eduardo V. Manalo led the celebration of the 20th year of establishment of the INC in the Jewish state in a special worship service and ordination the Zion Hall of the Inbal Jerusalem Hotel.

Ambassador Matityau said that he was “overwhelmed with the outpouring of friendship” that he experienced with his visit to Brother Eduardo and to New Era University (NEU) and the INC School for Ministers.

At the NEU, students waving flaglets of Israel, as well as of the INC, welcomed the Israeli ambassador with greetings and musical performances. At the INC School for Ministers, ministerial students also greeted the ambassador who was given a tour of the building where future INC ministers are trained.

“I must admit, I’m overwhelmed. I was expecting some sort of professional meetings, I ended up here with outpouring of friendship,” Ambassador Matiyau said.

He said the meeting with the INC Executive Minister was “positive” and a “really moving moment.”

“I want to thank Brother (Eduardo) Manalo and the Iglesia ni Cristo with its incredible hospitality, friendship,” the Ambassador said.

“What really struck me is the friendship. For us, we always say that we have a great relationship with the people of Philippines. Definitely I feel it with the people of the Church, the leadership. Today was just another good sign,” he said.
It was his first time to visit the INC leader and he said they discussed issues where they can cooperate with each other.

Ambassador Matityau said he is looking at the structure of the INC’s “social outreach” and “philantrophy outreach.”

“We are interested in what you do and look (at) it as a bridge between us,” he said in an interview. 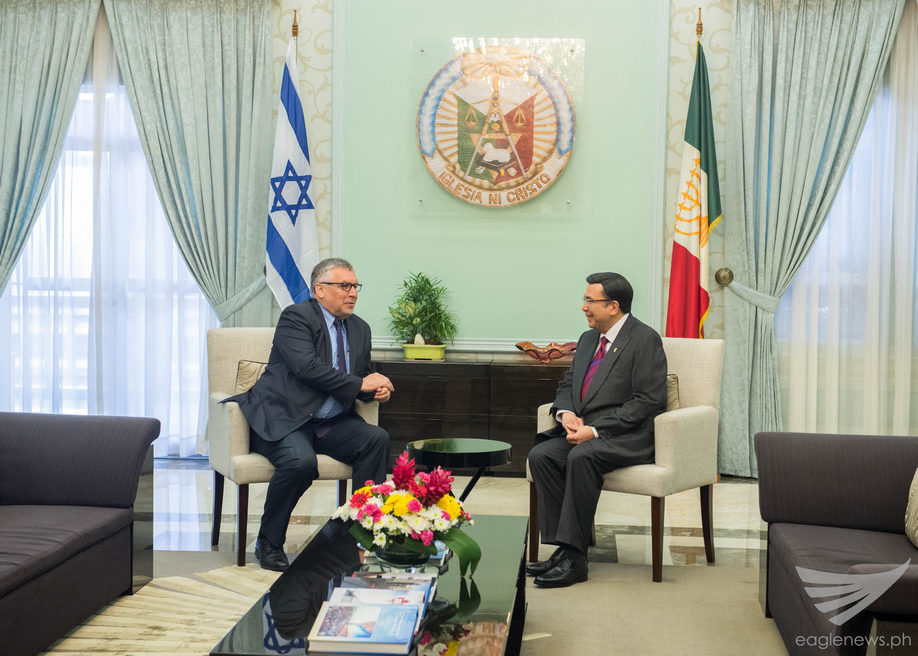 Ambassador Matityau also discussed with Brother Eduardo the ways by which Israel can help in the INC’s eco-farming communities. Presently, the INC has 18 eco-farming sites all over the country which are meant to help local folks in the area to be self-sustainable.

“We will be happy to create room in our system of training in Israel for experts on those eco farms. We will be happy to explore together what we can do in order to support those farms. We have experts here in town to bring them over, to have a brainstorming about how to do it better, how to learn from one another, introduce new technology if needed,” the Ambassador said in an interview later.

Matityau said that Israel would also want to help the New Era University (NEU), one of which is by providing trainings and knowledge transfers, especially since his country is very interested in capacity building.

“This range of training that we have — and that is the main part of Israel is engaging, capacity building — we are not investing so much in infrastructure, (but in) human resource. That is the key to everything. So we invest most of our energy and money in capacity building. And we shall be happy to have the Iglesia Ni Cristo with its institutions to be a part of our training programs,” he said.

The Israeli ambassador also said he was “very impressed” with the increasing presence of the INC, not only in the Philippines, but around the world.

“It’s amazing to see how widely the Church is positioned,” Ambassador Matityau said.

Matityau became Israel’s envoy to the Philippines on August 1, 2014 and this was his first visit to the INC Central Office. (AYP,DCY Eagle News)